Budding artist Eric Muvhango might not be well known in the music industry, but his latest offering, Murena nga vha divhonadze kha Ramaphosa, will surely lift him into being a household name.

The single, which was released end of April this year, appeals to the nation to pray for Pres Cyril Ramaphosa so that he can succeed in his quest of fighting crime and corruption in the country. Mugwena, who has already recorded two traditional gospel albums, said he had been moved by Ramaphosa’s ascendancy to the highest position in the country early this year.

“Immediately after he became president of the country early this year, I started to believe that our country can reclaim its glory days we enjoyed under Pres Nelson Mandela. I am one of the people who were hopeless about the future of this country before Ramaphosa came in. Once he came in, I started to believe in his leadership.”

Mugwena called his single Murena nga vha divhonadze kha Ramaphosa, literary meaning God show your might through Ramaphosa, because he did the same with Mandela. He said few people believed that Mandela would come out of jail and lead the country.

“God did miracles and Mandela successfully led this country while many people were united behind him. My worry is that there is lots of fighting within the ANC. Many want to see Ramaphosa failing, because they are not happy about his mission of fighting corruption.”

Mugwena started singing in 2007 at Mpandeli Secondary School in Tshifudi in a school choir under the guidance of deputy principal Mr Matsilele. He recorded his first album with the United Apostolic Church in Mangondi village in the same year.

He later met Pastor AA Netswera at Khubvi village, who helped to improve his singing skills. In 2014, he released his second album, Kunama o rapele. The seven-track album was in Zulu and Tshivenda. 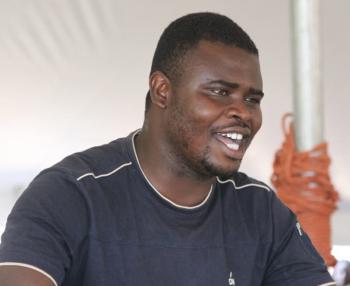