Pilato is an accomplished artist

A resident of the Zama-Zama section of Tshivhuyuni village, Pilato Bulala, is an artist whose art speaks for itself as it is displayed in the courtyard of his home.

He collects discarded cans, iron and other related debris and fashions them into art pieces which make art lovers flood to his studio from different corners of the world. Through the years, he has had visitors from Germany, England, Holland and most African countries who have all admired and bought some of his work.

“I may be young, but I am enjoying the kind of popularity and fame that many people only dream of,” he said. “Despite some challenges that limit me as an artist, I am confident in what I am doing, to an extent that I am not shy to climb to the rooftops and shout that I am living my dream.”

When he started off as an artist, he had no space to store and exhibit his artefacts and figurines. However, he had a sister who let him use the front side of her yard as a display area. Even today, Pilato does not have electricity at his new home. “I do most of my work from my brother's place and move them to my place,” he said.

According to Madi a Thavha, which is a hub of promotion for Vhembe District's artists, Bulala had coined a word 'scraptures,' because most of his work is made from scrap metal and iron which he collects by the roadsides, scrapyards and the bushes.

“We have been supporting this determined young man with training and marketing ever since,” said Marcelle Bosch of Madi a Thavha. “He has been to several of Madi a Thavha’s exhibitions and workshops where he learned to weld, how to make tin jewellery and got some exposure to national and international craft markets. He recently went to a couple of trade and tourist shows in Johannesburg too.”

One other thing that is important about this artist is that he is able to express himself in an amazing way when he speaks about his art and 'scraptures'. He becomes very enthusiastic when he welcomes vistors to his mud-brick rondavel gallery, describing every 'scrapture' and the social history behind it. “People are welcome to visit the gallery and view my art free of charge,” he said. 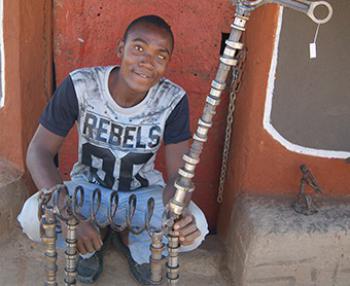 Pilato Bulala is seen in this picture with an iron giraffe that he had made from vehicle engine cams.