A local gospel music artist, Lawrence Mabasa, is one of the artists whose music is growing with time.

According to Mabasa, it was way back in 1993 when he realized that he could make a living out of music. At that stage, he was a primary school pupil and an active Sunday school learner.

In 2003, Mabasa decided to stand on his own. He tried his luck by recording his debut album, Lead me to Calvary. Although it was self-marketed and distributed, the album performed above his expectations.

The Tshidimbini-born singer went back to the recording studio again in 2007. His second album, Think of me, was released in the same year.  The album was followed by Sape isizwe in 2009, with When peace like a river following in 2011.

In 2014, Mabasa went to MB Recording Studio in Thohoyandou where he recorded his sixth album, Blessed assurance.  His seventh album, Sekusele, was also recorded at the same studio towards the end of last year.

Just like all his previous albums, his new release, Pass me not, will also be self-marketed and distributed. It was released two weeks ago.  It comprises 10 songs, including Hi mani langa famba, Joko ya hao, Hayani hu takadzaho and the title song, Pass me not. His three sisters, Tiyiselani, Khangweleni and Khumbelo, are the backing vocalists on the album.

According to Mabasa, the album is selling very well, making it difficult for him to meet the high demand. Mabasa said that he would be performing live at various ceremonies, including weddings, memorial services and unveiling of tombstones during the festive period in a bid to promote his album. 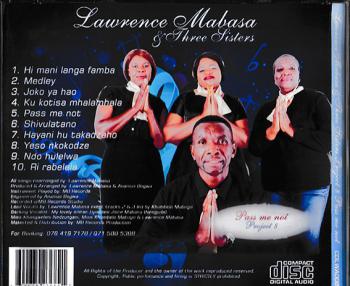