The 21-year-old Kyrie Wallace is a young, up-and-coming artist and a popular singer among the youths who have a flair for good music.

He is a rapper, singer and songwriter whose pen has given birth to more than 80 songs, most of which have not been recorded yet. He fell in love with music at the tender age of 10 as he grew up singing in the church.

He was born Wallace Simbarashe Kuyeri in Harare, Zimbabwe, and he moved to South Africa with his mother. He has been living in Louis Trichardt for some years now.

“My father is a pastor in the church, so he played a pivotal role in encouraging me and supporting my singing from an early age,” he said. “I realised at the age of 14 that music was my calling and I started to learn to sing across genres.”

He has just released four singles, Bachura, Why I hustle, Close the door, and Take you high, which are all good to listen to because he injects a sense of authenticity into every song he composes and records. “Music needs to be unique but somehow familiar, so that people can relate to it and get to enjoy it,” he said. “I sing that kind of music my fellow youths find interesting. It speaks directly to them. It motivates them to get up and work. It encourages them to read books and study harder in order to make it in this world.”

Just listening to two of Kyrie Wallace's songs, one can hear that this young man possesses great talent as a singer. “My music is about the life of nowadays,” he added. “A woman can leave you for a moneyed someone. The love for money is then greater than the love for fellow human beings or true love in the sense of relationships.”

He stated that, for him, music was a way of life; he expressed his feelings, thoughts and emotions through music. “I find it very therapeutic to make music because I love what I do,” he said. “To me, music is everything and it defines me. My dream is to become one of the top hip-hop artists, singers and songwriters. I also plan to do collaborations with various major artists and to travel the world to make my music known worldwide.”

He said he loved South Africa for the many opportunities available for the youth, as well as the diverse cultures and many languages that all make the country fun to live in. “I'm learning different things every day,” he said. 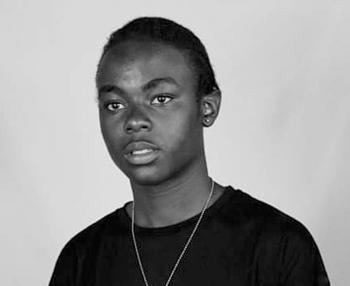 Kyrie Wallace is a young, up-and-coming artist and a popular singer among the youth. Photo supplied.