With his book The road to Damascus, Nemadzivhani won the motivational award, while Ramadwa won the leadership award with his recent book, Resuscitation leadership.

"I feel so encouraged and honoured by winning this award. It gave me even more strength to keep on encouraging people to be who they really should be in life. It also showed me that I am on the right path," Nemadzivhani told Limpopo Mirror.

Nemadzivhani, who hails from Khubvi village, said that The road to Damascus was conceived from the great conviction that he had about the fact that most of the people were just living their lives for survival and therefore had no time to attend to the real reason why they were even alive. "As I was busy observing how people go about spending their God-given times on this earth, I realised that most of them are only after the material success instead of being after that which makes them significant in the lives of others. They ignore their passions, so that they can go for anything that can make them financially successful as fast as possible," Nemadzivhani said.

Ramadwa said it was a great feeling to have won the award. "I do not write with an award in mind. I write to communicate my thoughts and experiences," Ramadwa said. "When I was told about the nomination, I got excited. Never in my wildest dreams did I think that the panel will decide favourably for a book that is only four weeks old. I am grateful, though, because it just sends a message to the one person who is still contemplating to write that there are possibilities and you cannot write yourself off even when others do."

He advised young authors not to give up on their talents. "If God has given you the gift of writing, never give it up for anything," he said. "It starts with one book; even if it may not be the best that you wanted, but your story will be out there for people to interact with. It always gets better with time. Most importantly, write the book to teach certain lessons of life. Write a book about your experiences or ideas that are unique that you have thought." 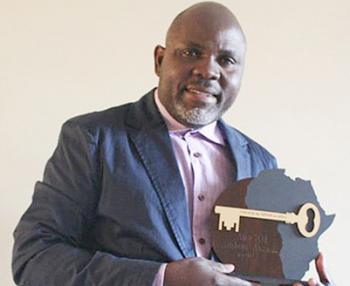