The legendary Tshivenda group, Adziambei Band, have released a new CD, Tshipala mulilo, which contains a selection of old and new songs.

The new album has ten tracks, which include six popular old tracks, such as Midzimu ya madimoni, Ndi do mulivhuwa ngani and Mahaya ashu.

The founder of Adziambei Band, Mr Elias “Maele” Sirwali, said the title track, Tshipala mulilo, aimed to inform listeners that if one does not listen to elderly people one might end up in some serious trouble. He described the track Tshikona as the dance of Vhavenda people, which, when danced, could speak to the ancestors. “As for the rain, after dancing tshikona, the rain comes,” he said. “We also included songs that were recorded some years ago. Midzimu ya madimoni, for instance, will remind fans of the good old days when Adziambei Band was formed. This was the first song on our album,” said Sirwali.

In 2012, the Adziambei Band won the Song of the Year award during the Tshivenda Music Awards (TSHIMA) with the song Nwana o ngala ngala.

The band also promised the people during the funeral of the late singer and composer of the band, Tshivhangwaho Raedani, in March 2013, that the band would not dissolve. Since then, they released Mu tula gole in December 2013 and Shango lo ima nga thoho Volume 14 and Matula Volume 15 in December 2017.

The new CD was recorded at Ngoma dza Tshitomboni studios in Thohoyandou, with keyboards and bass guitar by Mulalo Mukwevho, while it was produced by Elias Sirwali. 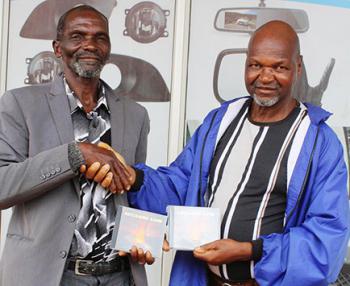