Smanuza cracks jokes for you

“Life without laughter and mirth would be a boring journey to the dry desert where water is a scarce commodity.”

The most-booked comedian in Vhembe District, Emmanuel “Smanuza” Phunyugu, became philosophical when he met up with Limpopo Mirror recently for an interview.

“To me, comedy is the essence of life, just like music is to some people,” he said. “There’s comedy in most aspects of our lives. Without comedy, people who are bereaved, injured or hurt would cry forever. We find the healing in jokes.”

Smanuza is a self-taught comedian, who started experimenting with the craft some seven years ago. His first video clip went viral on social media in 2015, where he was teaching a White man to speak Tshivenda. It was entitled Mukapi was tshisima a si munwi watsho. “People loved it very much and it had reached hundreds of thousands of views in a short space of time.”

As a comedian, he puts on a wig and mimics most popular Tshivenda singers and musicians and he sees this as a way of promoting those very artists.

“I had done a Makhadzi and Dj Call Me's Matorokisi mimic so well and the clip which I had then uploaded on YouTube went viral,” he said.

He has so far recorded and published over 300 video clips online, but he still views himself as an “upcoming comedian”. He has worked with Bushy Malima from Ha-Magau as an actor in Zwo vhifha mara zwi do naka.

“I appear in gigs and at corporative functions for money since I am a professional comedian,” he said. “I am now working on amazing works with my contemporaries, Tshigomele and Cyria Tshipetana.

He resides at Maebani village in the Kutama area, and he is available on Facebook. He can be reached on 076 541 0435. 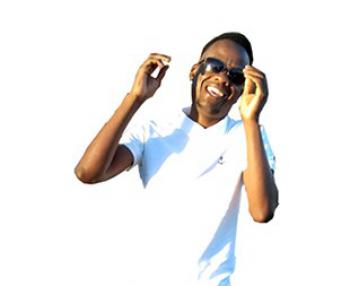 Smanuza has been entertaining people for years now.