Having grown up in a disadvantaged background does not stop a young man from displaying his talent. Isaack Modipa of Tshiozwi has found solace in cardboard boxes, wire, woodcarving and his creativity.

The multi-talented Modipa makes beautiful cardboard box models of houses, animals and celebrities and this kind of art has earned him respect among the local community. "This is my God-given talent and I do not want to confine it to my village only," said the energetic artist.

Modipa said that he fell in love with art when he was very young. "I just played around with cardboard boxes, but never thought I would one day make something attractive."

He added that things had changed for the better in 2017. "Everyone was impressed by my work and I then took my talent very seriously. I received encouragement from different people in the community and family members."

Modipa explained how he does his art. "I go out to the dump and pick up cardboard boxes, which I will then cut into desired pieces. I initially draw what I want to do on paper. I then convert the measurements into reality, on the cardboard box. After studying the paper well, I then start creating the model, following the measurements that I did on the paper."

He added that this was better than not doing anything at all, “because I can now support my family. Although I sometimes went for weeks without any customers, my hard labour has started bearing fruits, because at the end of the day, I can at least take something home”.

He said he had been unemployed for many years and it was very difficult for him to support his family. He encourages other unemployed members of the community to start their own initiatives that will generate some funds. 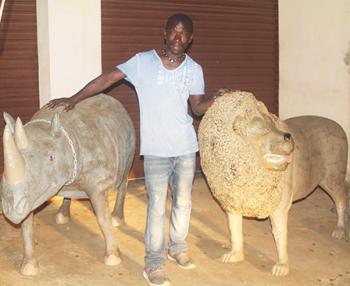 The artist Isaac Modipa with two of the figures he made.