From the dusty streets of Mapate, Challo B recently released his debut album, entitled Diamond in the Dust. Lutendo Joe Rautshahalo, who is well known as Challo B, finally released his long-waited album on Sunday, 5 April.

The 25-year-old started rapping in Tshivenda in 2007 and has released an album, an extended play (EP) and five mixtapes to date.

Challo said his pursuing a music career was like a calling. “I used to draw and do sign writing. One day, I felt like quitting and I decided to stop drawing because I felt that I was not really expressing my feelings or telling my story,” he said.

“I then started to engage myself more into music. I tried to be a Deejay at an early age, but I failed. That was when I found a good rap beat and I started rapping. I realised that I could paint more pictures with words than with drawings.”

Challo B is self-taught lyrics writer who describes himself as an underground gangster rapper. In his coming projects, his fans can expect more, “mature, real rap, quality and authentic style of music, new talent and raw street facts into useful information that will transform listeners’ mind and their hearts”.

Besides being a musician, Challo is graduate with a diploma in software development.

If you are interested in his music, you can buy his new album online on social media by simply searching for Challo B Gintsa on Facebook or Mapcity Challo B and you can also send him a WhatsApp message on 084 975 5693. 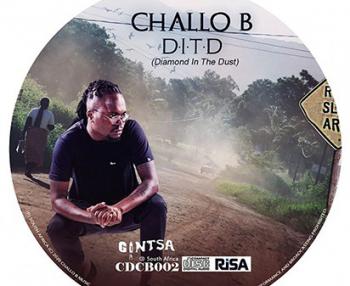