The song Just Breathe is doing the rounds and receiving massive approval on social media. The song was created by Mpho Sadiki from Ha-Manavhela village in the Kutama area.

Mpho, who had attended Ridgeway College as part of the Sumbandila Project, said that she had composed and recorded the song with the help of her sister, Ngweta.

“Knowing my love for music, Sumbandila asked me to sing an encouraging song for the students in the organisation,” she said. “I could have done a cover of a song I knew, but I understood the need for words of encouragement from someone who is just like them, a fellow student. This song reflects my own feelings at this time. All these feelings can become overwhelming and almost suffocating, so it is important to remember to just breathe and live in the moment.”

She added that the first words she wrote were “It’s alright, You’re alright” because that has always been her mantra, more so now that the world is faced with the Covid-10 pandemic.

“It is a difficult time in the world right now,” she said. “A lot of people are struggling, feeling overwhelmed, coming to terms with the new normal of the world, and this includes myself. So, I wanted to remind myself to Just Breathe. Amidst all that is going on, I just need to breathe because, above all, everybody just needs to know that there’s light at the end of the tunnel.”

Most people who have listened to the song have expressed a liking for the song, and that is way more than Mpho had expected would come out of it. “Like I said before, it is a very personal song and if anyone can relate and take comfort form it, then great!” she said.

She stated that there was no point she could pinpoint and say that that was when or how she started singing. “Singing has always been something that’s part of my life,” she said. “On any random day, you can tell that my father is awake because that’s the first thing he does every single morning and someone, somewhere in the house will just join in and then you just have a song going. So, singing has just always been singing for me.”

Mpho has been part of Sumbandila since 2010 when she was in Grade 8. She started as an Outlier (Exceptional) student, attending Saturday and holiday classes.

“During the Easter holiday school in 2011, Ms Leigh Bristow told me she wanted me to start attending school at Ridgeway College in the following term,” she said. “This was probably the greatest day in my life at that point in time. I could not believe I had been given the opportunity to get world-class education. Even today, I am still part of this exceptional Sumbandila family, who still support me in everything I do.”

She revealed that Just Breathe was the first song which she had ever written and recorded. “But ever since recording it, I have had this newfound love for making music, not just singing but the making of music,” she said. “Making this song has inspired me so much that I went and got myself a small recording microphone, and I am now actively practising on my guitar that I have had for years.” 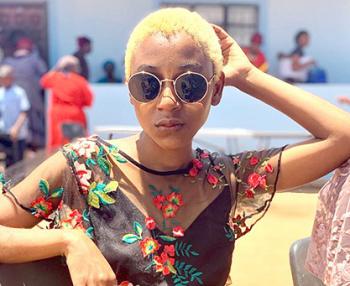