Acolly Mandiza from Ha-Muraga is ascending the music industry ladder with the speed of lightning, and this is evident in the quality of his songs.

This producer, songwriter and performer discovered his talent as a singer when he was at primary school. He said that his cousin had taught him guitar skills and he went on hone his skills with more exercises.

“My dad, the legendary musician Vho-Elvis Mandiza, bought me my first guitar upon realising that I was developing quite well with guitar skills while using other people’s instruments,” he said. “Now that we were celebrating Fathers’ Day, I feel honoured to name my father as the man who had shaped the man that I have become.”

Acolly would play his guitar along with the church’s band at The Living Gospel World Mission Church. “Music means everything to me,” he said. “It is a lifestyle and a career. I still play at church even today. Music can be used as a weapon to fight crime. Messages that people can put in music are important.”

He stated that the music industry was full of scams and thievery and that he was happy that he had his father, who had knowledge about the operations of the industry. “He guides me,” he said. “I tread in the footsteps of a giant.”

So far, Acolly has composed and released three albums and he is most popular for many songs, such as Elelwani, Ha-Muraga, Shambo la Shambo, Muimeleli and Ni song nyama. He is available on Facebook and he can be reached on 078 265 9129. 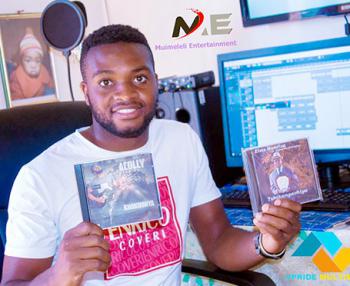 Acolly Mandiza is ascending the music industry ladder with the speed of lightning. Picture supplied.