Music and school can mix, says 14-year-old Rotondwa Ndou of Madimbo village outside Musina. A Grade 9 learner at Lwaphungu High School, Ndou has already released two albums and she is working on her third one, to be released next month.

Going by her stage name of Sesi Wa Muimbi, the little star is an inspiration to many young people in Madimbo and the surrounding villages. Her beautiful voice and acrobatic dancing moves have earned her respect amongst her peers in the music industry.

“I used to sing at Sunday school in church, and everyone appreciated my voice. Even at school, I used to lead songs during assembly, and it made my teachers and fellow pupils happy. One day, I told my parents that I wanted to be a music star and they promised to support me as long as I did not neglect my schoolwork.”

She said her father, Mr Never Ndou, booked a studio for her in 2018. Her mother, Mpho Malitsha, “was always on my side and encouraged me to be focused. I was a little bit nervous when I went to studio for the first time, but I adjusted as time went by. That was when I recorded my first album, Mpho yanga. The album was a hit and local people bought it in large numbers. It was always played in taxis, local shops and people’s homes and that made me happy.”

Sesi said she returned to the studio last year and recorded another album, Tshisima. “This one was also played on radio and it is still receiving airplay on Musina FM. I used to perform in various public places to promote it, and it also sold a lot of copies. Releasing the second album never distracted me from doing my schoolwork and I continued to impress my parents and my teachers with my schoolwork.”

She said she would never sacrifice her education for music. “Education is my first love, and it will open many doors for me. If I am educated, I will be able to manage my music career with ease.” 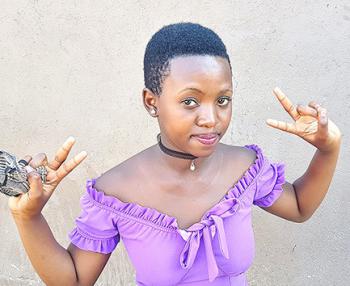 At 14 years of age, Rotondwa Ndou, aka Sesi Wa Muimbi, has already released two successful albums. She is working on her third one to be released next month.