A new novel about a loving father

Nicolus Matotoka, author of the best-selling self-help book on love, Keep Love Burning, in 2015, has made a comeback with even more literary delights.

His latest offering, a novel titled All This Time – Good things were right under my nose, highlights the topic of fatherhood and he says that this was exactly the kind of story he had planned on writing for a long time.

“This is the kind of a book I have been yearning to read myself since I became a parent in 2016,” he said. “My main concern was who was going to tell me what to do when my daughter, Faith, needed guidance. I wanted someone to guide me through parenthood, but that didn’t happen. I wanted to be that kind of a father I envisioned in my mind – a super dad!”

Matotoka, who resides at Tshikwarani village in the Kutama area, does not brood about his own biological father’s absence in his life but believes that for fathers to be involved in the upbringing of their sons and daughters is paramount.

“In the story we see a father who puts his daughter’s care first,” he said. “This single dad receives an important invitation to attend a business meeting in Cape Town, but when he gets a notification from his daughter’s school informing him that the daughter is not doing well, he cancels the Cape Town trip. This shows how much he cares for his child.”

Matotoka paints a beautiful picture of a father who is able to raise a child by himself. “Such fathers exist, but they are not given a voice in our literature,” he said. “I wanted to show the world that a man can raise a child by himself too – even a girl child, for that matter. I know that this I something many people might find difficult to understand, but that is the kind of father I always wanted to be.”

All This Time – Good things were right under my nose is available in bookstores or directly from the author. The book costs R165. For more information, call Matotoka on Tel 076 092 4178. 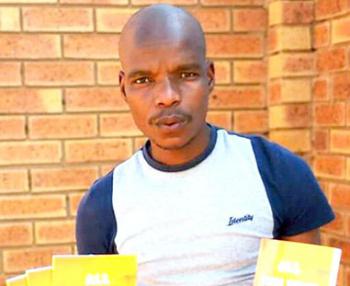 Nicolus Matotoka with his latest literary offering, All This Time – Good things were right under my nose. Picture supplied.