Natty King Elijah is versatile when on stage

Singer Ndanduleni Elijah Dombo (29), better known as Natty King Elijah or The Lion Poet, is quite versatile when delivering his performances on local and national stages.

Not only does his poetic verses range from roots reggae to dancehall and traditional Tshivenda music, but he does percussion as well. He did a myriad of songs, including hits such as Thambulo yanga, Huna ndado, and Burn down Babylon for record labels such as Unik Prodakshin, GBM Music Production, and MB Records.

In his relatively short music career, The Lion Poet has already worked with other talented, established musicians and producers, such as Mulugisi Mamafha Ndivhuwo, Clemy Nevari, MC-A Andrew Nkhumeleni, Bashean Mudau, Nkala Sadiki and Masala Gera Mudau. These associations helped shape the musician that he is today.

A resident at Ha-Nesengani Tshivhazwaulu (Mangilasi) outside Vuwani, The Lion Poet completed his matric at Tshipakoni Secondary School. “I started writing poems in 2006 and became more serious in 2010,” he said. “Since I began attending free vocal and instrumental lessons offered to youths by the late Man Tom Maladzhi, who was a member of the reggae group, Rainbow Dread, I found myself doing better as a lyricist and percussionist. Soon I was turning my poems into songs.”

In 2015, The Lion Poet and Ndivhuwo “T-Jah” Tuwani recorded and released the song Ndi tshila na Marasta, which became a big hit in music circles and earned both T-Jah and The Lion Poet great recognition.

Today he is a respected artist, especially in the reggae fraternity. He has just released a single, called Lockdown Alert (ft Ras Clemy Nevari), which was recorded at Ananius “Ani B” Begwa’s MB Records. “I love poetry; it is in my veins,” he said. His last album, Ndado shangoni, was released in December 2020.

The Lion Poet is available on most social-media platforms, such as Facebook (Natty King Elijah Dombo or Nndanduleni King Elijah Dombo), Twitter (@dombondanduleni), and Instagram (@natty_king_elijah_dombo). He can also be reached on Tel 072 691 3890 or 073 596 3095, or nndandulenielijahdombo92@gmail.com. 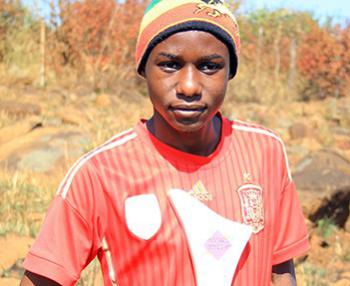