Mukumela knows how to juggle his diverse careers

Maanda Stanley Singo Mukumela’s fans become all excited when they see him on their television sets, but a whole other side to their favourite drama actor exists as well. In real life, Mukumela, who hails from Ngwenani ya Ha-Mapholi village outside Thohoyandou, is also a dedicated police officer and worker’s union representative.

To fulfil such diverse roles in everyday life takes a special kind of devotion – and extremely careful time-management skills – but Mukumela reckons he has what is required.

The actor side of him features in various popular television dramas, such as Muvhango (SABC 2), Gomora (Mzansi Magic), Queen Sono (Showmax) and Diep City (Mzansi Magic).

His character in Diep City, which is currently airing on television, portrays the role of a man called Power Guerilla, an inmate who terrorises the other prisoners, including the main character, Mgendeza. In Muvhango, his role was that of a male nurse who was secretly in love with Vhangani’s wife. His role in Queen Sono was that of a soldier, while in Gomora he featured as a criminal, stealing cars in scrapyards.

Mukumela describes his acting career as “an accident”, as he had never had any prior acting experience. “In 2018, one of my friends told me that Muvhango needed someone well-built and muscular to take on a role. So I went for the auditions and the team was impressed with my body shape, and I was immediately roped in.”

While he acted in Muvhango, he joined a Johannesburg-based casting agency, called Pro Heed Agency, who refined his acting skills and secured him the roles in Gomora, Queen Sono and Diep City. He has a lot of appreciation for the agency. “My sincere gratitude goes to Sedzani Stanley Sigebe, the founder and director of Pro Heed Agency, who recognised my talent and nurtured me to become one of the best in this industry. I never thought that I would one day become a famous face on television.”

Asked how he successfully shuffled between his roles as a police officer, actor and worker’s union representative, Mukumela was quick to respond: “The most important thing is to manage your time effectively. Another thing is to stay dedicated in everything I do. I always consider myself as a novice because I believe that we keep learning new things every day.” 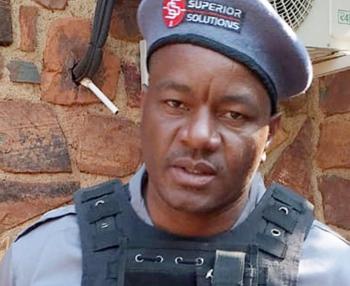 Maanda Stanley Singo Mukumela in his role as a soldier in Queen Sono, a Showmax television drama. Photo supplied.