After six years of travelling, intensive research and interviewing, Sydney Fetsie Maluleke has finally realised his dream to document the life of one of the most respected Xitsonga musicians of our time, Thomas Chauke*.

Maluleke, who hails from Muyexe village near Giyani, was ecstatic when his book, Dr Thomas Chauke - Everything is Ximatsatsa, was finally printed. The book, published by Maluleke’s publishing company, Maluks Books, of which he is the managing director, will be distributed to the public within the next two months.

Speaking to Limpopo Mirror on Saturday, 14 May, Maluleke said that writing this book was one of the greatest honours he could bestow on Chauke, who is popularly known as ‘Xinyori’. “We are very fortunate to have this great man among us. He is one of those important figures who need to be recognised while they are still alive. Chauke never compromised his culture and tradition and stands out as one of the greatest and most successful Xitsonga musicians of our time. I am proud to have finally played my role in recognising this larger-than-life character in my lifetime.”

Maluleke’s book chronicles Chauke’s life. “It explains how Dr Thomas Chauke emerged in the Xitsonga music fraternity in 1981 with his band, Xikundu Stars (Tinyeleti ta ka Xikundu), which later became known as the Shinyori Sisters, and how they revolutionised the once marginalised Xitsonga music.”

The success of Chauke and the Shinyori Sisters prompted Maluleke to document something he considers very special. “With his band, Dr Thomas Chauke recorded 37 successful albums under a series of the Shimatsatsa, of which most notched [up] gold and multi-platinum status. Until now, Dr Thomas Chauke has won 16 SAMA Awards, including a Lifetime Achievement Award, and has acquired two honorary degrees from the University of Venda and the Tshwane University of Technology. He is also a recipient of the Order of Ikhamanga, bestowed upon him by former President Jacob Zuma.”

The book also describes how Xitsonga traditional music shaped the culture, language and identity of the Vatsonga people. “The strength of the book lies in the interviews I conducted with Dr Thomas Chauke himself, his late mother, N’wa-Masiya, family members and members of his band. I was impressed by the way he recounts things. His ability to communicate so well is definitely one of the things that contributed towards his success.”

Chauke told Limpopo Mirror that he wholeheartedly welcomed the book and he thanked Maluleke for the high honour. “I am very happy to be the first Xitsonga artist whose life is narrated in a book. This was long overdue. Many people approached me about the idea before, but they never fulfilled their promises. I regard Maluleke as a hero and great man who fulfilled what many people failed over the years. I am very grateful about this initiative, and I lack enough words to express my gratitude towards him and everyone who made this project successful. There is nothing more fulfilling than being honoured by your own people while you are still alive.”

Besides this biography, Maluleke has also authored a book on the Mbaqanga musical group the Soul Brothers (Soul Brothers – The life and Times), as well as a book on South African music legend Steve Kekana (The I in me).

*Chauke was awarded an honorary doctorate in African languages by Univen in 2010. 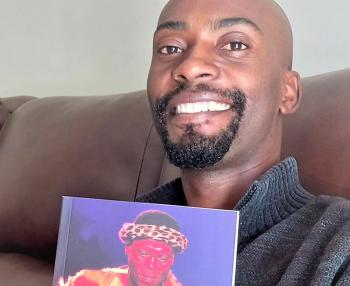 Sydney Fetsie Maluleke with a copy of his book, Dr Thomas Chauke - Everything is Ximatsatsa. Photo supplied.