Although education is very important in these changing times, some people cannot rely on a good educational background to make a success of their lives. Many people are forced to make the most of their God-given talents to survive.

One such example is Vhutshilo Nyamande, an emerging local entertainer from Khubvi village outside Thohoyandou, who went from being unemployed to becoming a popular master of ceremonies and entertainer overnight. Nyamande, better known as Pollen, was thrown quite literally into the spotlight, and she just decided to go along with it and use what she has.

Nyamande explained how she ended up in the entertainment industry: “I attended a social gathering as a guest three years ago, and the event organisers were disappointed that the master of ceremonies and dancers who were booked did not show up. They called me aside and asked if I would direct the programme, but I told them that I did not have any experience in that regard. Although I resisted at first, they persuaded me to take over. I ended up as master of ceremonies and did such a good job that everyone was impressed. I also doubled as a dancer and after that day, my name was on everyone’s lips.”

Since this event, Nyamande had been receiving invitations to direct programmes at various social events, such as baby showers, birthdays and family gatherings. “Most of the events were around my village and I did them for free because I could walk there. When I received invitations from other areas, the organisers voluntarily offered to pay for my transportation, so that I was able to grace their events.”

Nyamande realised that she had a talent for entertaining and saw the potential to generate an income from it. “Now I get bookings almost every weekend, and I am able to put food on the table. My message to those who are unemployed is to use their talents to generate an income,” she said. 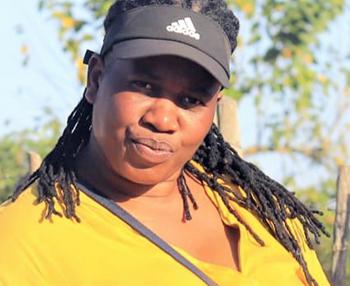 Local master of ceremonies Vhutshilo “Pollen” Nyamande encourages unemployed people to use their talents to earn a living. Photo supplied.