The 24-year-old twins were born Prince Mavhungu, aka Prince Wa Miswaswo, and Charles Ḓivhani, aka Charles Wa Story. They hail from Tshamutavha in the Niani area but are now based in Gauteng. Incidentally, they are also the younger brothers of well-known hip-hop sensation Proheed.

As staunch members of the United African Apostolic Church (UAAC), the duo adopted the drum-dominated Zionist music (muzika wa tshigubu) as basis for their own music. They say that they want to take this genre, which is often underrated, especially among the youth, to new heights.

The EP contains five very powerful tracks and has since its release three weeks ago set the traditional gospel music scene ablaze. Recorded at Masana Records in Soweto by the famous DJ Davic, the beats were done by Ras Tycoon.

Two of these tracks, Vha Ima na Rine (title track) and Rifhe Shothodzo, have especially caused ripples, catapulting the brothers to instant stardom as the songs grow to even higher demand. No function is complete without them now.

“We were born in this church, and we have not known any other church. Its music flows in our blood. We have added other instruments to take this music to another level, but still with the traditional feel that is the trademark of the church. We want our music to appeal to both young and old,” said Prince Wa Miswaswo.

His brother, Charles Wa Story, believes that the youth of today are faced with many challenges because they have lost God’s way. “Many of our young people die before their time because they have forsaken God. We are trying to send a message out there to the youth to focus on serving the living God and they will have a successful life,” he said. 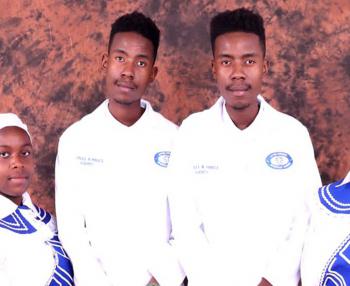