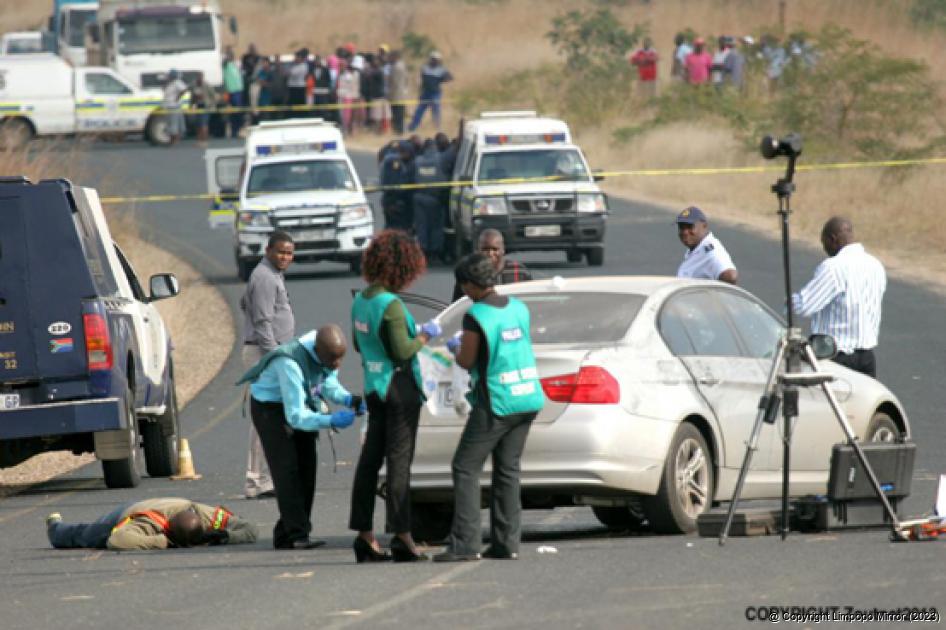 Four suspected armed robbers’ lives came to a violent end on Monday morning when they were gunned down by members of the South African Police Services, following a failed cash-in-transit robbery. One of the robbers´ body can be seen laying face down with a police reflector jacket on.

Four suspected cash-in-transit robbers paid the ultimate price Monday morning when they were gunned down by the police, following a botched robbery attempt.

Just outside Vuwani, on the Masia road, the bloodied bodies of the four men bore silent testimony to the violent shootout which had brought an end to their lives. They lay several metres from each other next to the bullet-riddled silver BMW they were travelling in. One suspect was wearing a police reflector jacket, and the police found a blue police light inside the BMW.

The shootout followed when members of the police’s operational response team noticed a Coin security vehicle standing next to the road, with the four robbers allegedly trying to open the back doors of the vehicle. Two security guards were transporting money from Elim to Vuwani.

According to provincial police spokesperson Brig Hangwani Mulaudzi, the suspects, armed with 9mm pistols, started shooting when the police stopped to investigate. A shootout between the four men and the police then erupted.

Amidst the chaos, the robbers apparently tried to flee into the bushes but were gunned down before they even managed to reach a nearby farm’s boundary fence. One of the suspects was shot dead next to the BMW. Another one succumbed only a few metres further away, while the remaining two’s bodies were found in the reserve next to the road.

Neither the Coin security guards nor any of the policemen were injured during the shootout.

Following the incident, the police said it was clear that crime does not pay. “It’s a clear indication of the hard stance that we take against criminals who think they can come and commit crime in this province, and in the process also turn their firearms on the police,” remarked provincial police commissioner Lt-Gen Simon Mpembe.

Next to and inside the BMW, police recovered a 5-litre can of petrol, some matches and a pair of woolen gloves. Four 9mm pistols were also recovered on the scene. According to information available, the serial numbers had been filed off.

Police also found braided rope and beads on the bodies of the four suspects. It is assumed that these could be muti talismans used by the robbers to protect them.

At the time of going to press, the police had yet to release the names of the four robbers. As for the origin of the BMW used by the men, the weapons and police gear found at the scene, Mulaudzi said they were still investigating the matter.

On Tuesday, the spokesperson for the Independent Police Investigative Directorate (IPID), Mr Moses Dlamini, confirmed that they are investigating the case. He explained that it is mandatory to investigate any death as a result of police action to determine if the death of a suspect was justified.

The Masia road where the incident occured.

Inside the bullet-riddled silver BMW police also found a blue police light. On the righthand side a red can, which was filled with petrol, can be seen sticking out. Police suspect that the robbers wanted to use it to torch the Coin Security vehicle.

The silver BMW 320i, belonging to four suspected cash-in-transit robbers, was riddled with bulletholes. The wipers were still working while police members were working on the scene in the background.

Isabel joined the Zoutpansberger and Limpopo Mirror in 2009 as a reporter. She holds a BA Degree in Communication Sciences from the University of South Africa. Her beat is mainly crime and court reporting.