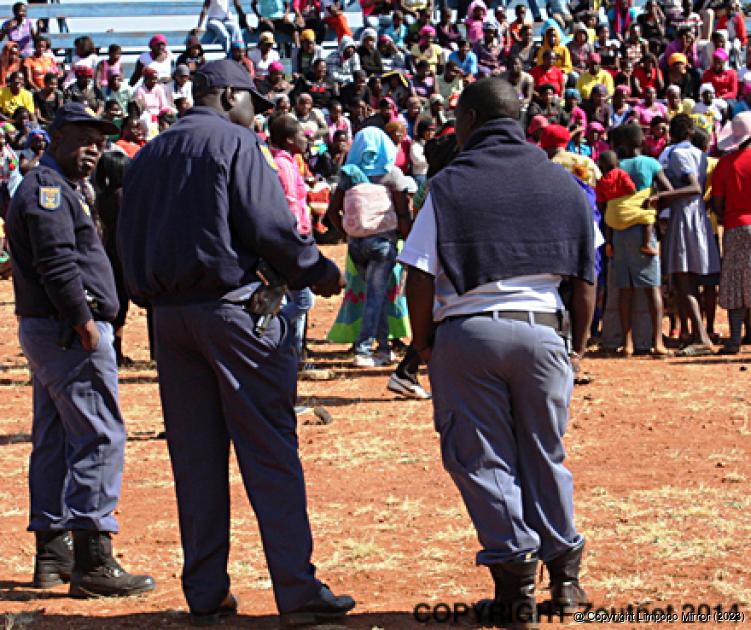 Police at the ready during the meeting.

Burial of “wrong man” leads to violence at Shawela

On Sunday, the situation at Shawela outside Giyani was tense but under control when angry residents forced a family out of the village.

The community accused the family of having buried the wrong person.

This action by the residents followed a meeting held at the local stadium on Sunday morning. Hundreds of residents filled the stadium and resolved that they were not satisfied with the way the family had handled the whole matter.

It was decided that the family should move out of the village until such time that a family member, Glen Mthimuhulu (30), who had gone missing in Midrand in August last year, had been found. A body believed to be his was allegedly found in Pretoria and was finally buried in the village a fortnight ago.

Things took another turn when, early on Sunday morning, some angry villagers, who claimed that the family had buried the wrong body, dug up the coffin and took it home. It is believed to be the body of an old man and not that of Glen Mthimuhulu.

After it had been resolved that the family should be moved, residents went back to the village and told the stranded and grieving family to pack their belongings and move elsewhere.

Limpopo Mirror visited the family and found them packing their belongings while waiting for transport. Hundreds of residents were at the gate, singing freedom songs while the family had an impromptu meeting. Under pressure, the family moved from the village.

In the meantime, a police spokesperson, Col Ronél Otto, confirmed that they have opened a case of malicious desecration of a grave and malicious damage to property.

Headman Daniel Mabunda calms the residents during the meeting.

Community members gathered at the local graveyard to have a look at the grave where the body was dug up.

Distraught family members, busy packing their belongings before moving out of the village.

Glen Mthimuhulu, who is said to be still missing.