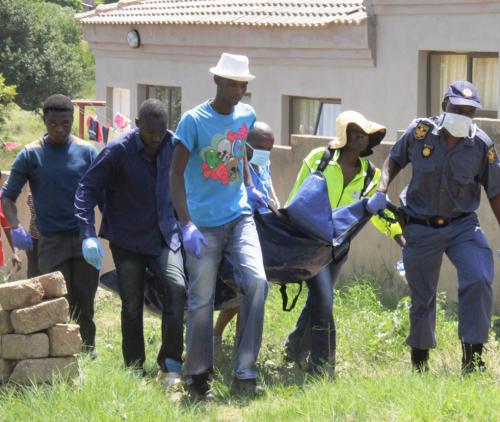 Sivhaga's body is taken to a waiting government hearse.

The family of a young man who was found floating in a local river at the weekend say they have every reason to believe that their son's death was not natural, but that he was ritually murdered.

Livhuwani Sivhaga (19) of Itsani has been missing for almost a week, but was found floating in the Tshidumbi River, a river that separates Shayandima from Itsani, on Saturday. The river has recently become notorious as a dumping site for dead bodies, since as many as six bodies have been fished out of the river in recent times. It is suspected by the local communities that the victims were killed somewhere else and dumped there.

Sivhaga's body was already decomposing. His body was discovered by a local boy who had gone to the river to fish. He raised the alarm and the police and its diving wing were informed. They arrived at the scene and the body was quickly taken out of the water.

The aunt of Sivhaga, Ms Joyce Mufamadi, identified the body at the scene, but the deceased's father, Mr Petrus Sivhaga, who was not around when the body was found, identified the body on Monday in the government mortuary. "My son was ritually murdered and I am 100% sure. I went to the mortuary because I had suspicions that his death had not been natural, but man-made. My suspicions were confirmed because I could see that some body parts were missing." He added that his son's eyes were gone, and when he opened the mouth, he found that the tongue was also gone. "His right ear was also missing, as well as the private parts. His feet were also dark, indicating that there was a struggle before he was killed. The skin on his head was also removed, which is indicative of a ritual killing."

He added that the members of his family had accepted the incident with very sore hearts.

Ms Joyce Mufamadi, the aunt of the deceased, said that Sivhaga was forced out of scchool as he suffered from epilepsy. “He went missing on Sunday and we thought he would come back home. The last thing that we ever thought of was that he would come back as a dead body."

Community leader Michael Gumula said crime had become a thorny issue in the area. "We are worried about the number of bodies found at the river. As leaders we are also saddened when people die in this manner,” he said.

Thohoyandou police spokesperson Const Avhafarei Tshiovhe confirmed that a body had been found in the river. She discounted the possibility of ritual murder, saying many things happened in the water. “We rely on post-mortem results and those will inform us of what to do after the doctor has confirmed the cause of death. As of now, we have opened an inquest docket,” she said.

Ms Joyce Mufamadi, who identified the body at the river.

Divers reach for the floating body in the river.