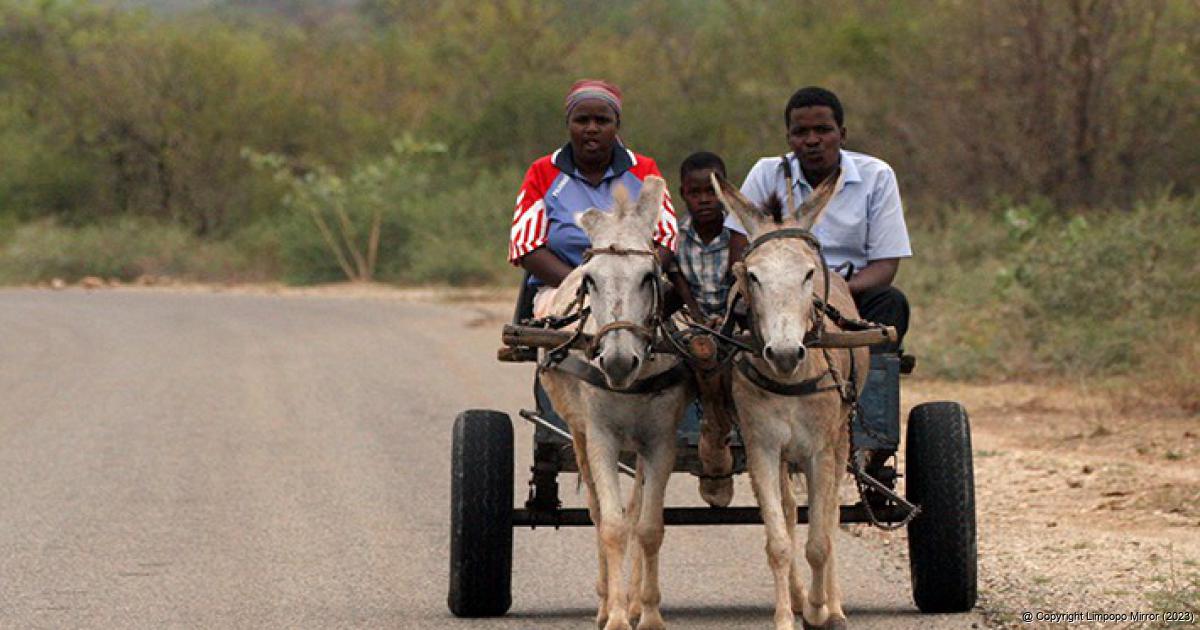 In Vhembe, donkey carts are still a popular mode of transport, especially in the rural areas of Venda, where this family on their cart was photographed.

The National Council of SPCAs (Society for the Prevention of Cruelty towards Animals) is concerned for the safety of donkeys.

There is a growing trend to slaughter donkeys to sell their hides. According to the NSPCA, donkeys are being slaughtered illegally because their hides trade for an attractive sum. This trend is rapidly diminishing the donkey population in South Africa.

The NSPCA issued a media statement last week, saying the demand for donkey hides, which contain a gelatine, was supposedly for medical purposes, such as treating the symptoms of ageing, insomnia and blood circulation. “The gelatine is a key ingredient in China’s ejiao industry, which produces tablets, tonics and a sweet syrup. The skins are soaked and stewed to produce or release this substance,” the NSPCA’s statement reads further.

A fortnight ago, the NSCPA was horrified when they discovered a vehicle travelling from Limpopo on its way to an abattoir in Randfontein, transporting 41 donkeys. This vehicle was intercepted by personnel from the Polokwane SPCA.

Adult male and female donkeys with foals were all in the same compartment with most of the animals in a state of collapse, crushed, dead or dying. Emergency euthanasia had to be undertaken to end the suffering of the donkeys.

Several charges relating to animal cruelty were laid against the four men who are all foreign nationals, according to the NSPCA. These men are still being prosecuted.

According to the NSPCA, donkeys are being bought from livestock auctions and rural communities or even stolen. This is not only the fate of Limpopo donkeys, but also those found in the Northern Cape, the Free State and North West Province and Gauteng.

Over and above the horrendous cruelty to the donkeys, says the NSPCA, it is noted that individuals and communities are suffering as their livelihoods, and often their only means of transportation, are being taken from them or purchased for money.

“This issue is international and syndicated. Police raids in Botswana and Zimbabwe confirm links with this trade to China and Hong Kong,” said the NSPCA. They have made an urgent appeal to members of the public with information of any kind to contact them at nspca@nspca.co.za. In Louis Trichardt, local animal inspector Lawrence Khodobo can be contacted at Tel 082 965 5151 or Alicia Thomas at Tel 084 900 5332.

In Vhembe, donkey carts are still a popular mode of transport, especially in the rural areas of Venda.

An everyday sight in Vhembe - a donkey cart employed to deliver firewood. The province's donkey population are currently under threat because of a growing trend to slaughter them for their hides.

Isabel joined the Zoutpansberger and Limpopo Mirror in 2009 as a reporter. She holds a BA Degree in Communication Sciences from the University of South Africa. Her beat is mainly crime and court reporting.