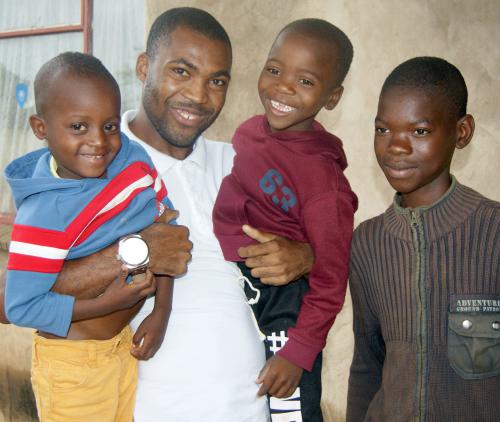 The ability of community journalism to reach good hearts was proven once again when a philanthropist foundation extended a helping hand to the Macuveze orphans.

The Tikvha Foundation read the story of the four orphans, Palmira Macuveze (17), Nkhensani Macuveze (14), Endlani Shilenge (5) and Julius Shilenge (3), in a January edition of Limpopo Mirror and decided to pay the children a visit. They found that the children were living in abject poverty and were all complaining of hunger.

The siblings do not have birth certificates and as such they cannot access SASSA grants. The Macuveze family is a child-headed household living in Mahatlani village. Both their parents, Mr Louis Macuveze (2008) and Ms Anabela Shilenge (2013), had died. Apparently, the children’s late father originally came from Mozambique and this is given as a reason why there was a problem in the issuing of birth certificates to all four children.

In 2013, after the death of her mother, Palmira, then aged 13, assumed the role of mother and father to her three siblings.

On Friday, the team from the Tikvha Foundation delivered groceries to the orphans and spent quality time socialising with them. The foundation felt that they were mandated to look after the well-being of orphans and vulnerable children as a way of bringing relief and hope.

“It’s a great privilege to have donated food parcels to this household,” said Tikvha Foundation's representative, Ms Nhlalala Tlakula. She said that Tikvha Foundation planned to distribute food parcels quarterly to orphans and widows around the communities with the aid of funding from various organisations. “Henceforth, we plead with different institutions to come on board and work hand in hand with us in reducing the plight of poverty in child-headed households,” she said. “This will truly help in reaching out to more households.”

On receiving the food, Palmira said: “We do not just acknowledge the fact that you brought us food. We sincerely thank you all for coming here to our home and spending the day with us. You make us feel like other children.”

Mabasa thanked the Tikvha Foundation for the food donations and Limpopo Mirror for highlighting the four children’s plight. “If it were not for Limpopo Mirror, these children would not have received the food today. The newspaper is playing a vital role in our lives as community members,” he said.

Tikvha Foundation brought smiles to faces of the four orphans in Mahatlani village.