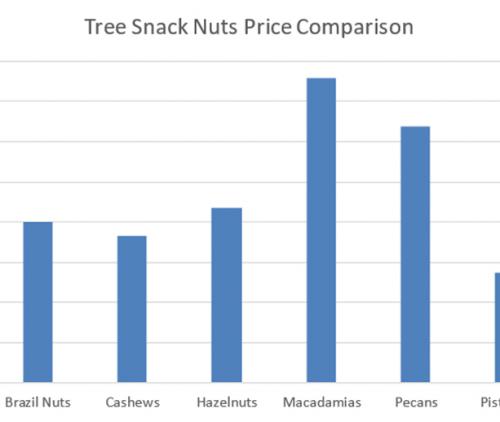 The average 2016 wholesale prices for different tree nut kernels (excludes pine nuts, which is not a snack nut). Graphic supplied.

Few people realise the negative impact crop theft has on not only the local economy, but also the national economy with South Africa being a major player in the export market.

The macadamia industry is currently experiencing a major surge in crop losses as a result of crop theft. In this regard, the South African Macadamia Grower’s Association (SAMAC) recently commissioned and issued a report aimed at establishing the economic impact of macadamia theft.

According to the report, the South African macadamia industry is a major world force and is competing to be the largest producer of macadamias. “South Africa was already the largest macadamia producer in 2011, 2013, 2014 and 2015 and is also the largest exporter of macadamia nuts globally. The industry contributes significantly to the economy of the country, with an export value of approximately R3 billion. In the Mpumalanga Province, macadamias are the second-largest forex earner (after coal). The industry is growing at an exponential rate and its importance in the South African economy will only increase,” states the report.

The downside to the macadamia industry's growing at an exponential rate is that, “due to the lucrative nature of the industry, theft of macadamias has been a problem for more than a decade. However, theft has increased significantly during the past four to five years as a result of the rapidly expanding industry and the increase in prices,” states the report.

The increase in macadamia theft is mainly contributed to the nuts' international value. “Macadamias are viewed as a premium product and are currently the most expensive nuts on the global market,” states the report.

The report highlights the findings of several private investigations into the nature of macadamia theft. Some of the findings have been that farm workers are often involved and that stealing occurs during the day and the night. The investigations also revealed that crop theft occurs in an organised manner, with independent harvesters contracted to steal the macadamias. These contractors, it was found, often sleep in the orchards and work in organised teams. Hawkers remain a problem, by stealing themselves or arranging with thieves to steal. It was also found that macadamias are even stolen from drying bins on farms and processing facilities.

“There has been various attempts to estimate the total tonnage of stolen macadamias. These figures range from between 1 000 and 4 000 tons,” states the report. Special mention is made of a private investigator who did excellent work in the Levubu region, giving a conservative estimation that at least 1 000 tons of macadamias are stolen from the Levubu region alone. “According to the investigation, many of these nuts are exported to Zimbabwe, but some are transported to the Mpumalanga Province, where syndicates buy the nuts. A recent survey conducted by SAMAC has resulted in a conservative figure of 2 120 tons of macadamias estimated to be stolen annually, to the value of R 146,3 million,” reads the report.

Apart from the R146 million that is a direct loss to farmers, the report indicates that the biggest impact that stolen macadamias has on the industry and economy cannot be quantified. That is the degradation of its reputation and status as a premium nut and the erosion of prices. “There is evidence of syndicates suspected to be involved with the purchasing, processing and redistribution of stolen macadamias, pushing prices down on the international market. This is possible because stolen macadamias are purchased at a quarter to a third of the normal price, and then sold for cheaper than the legitimate competition. This also occurs on the local market. SAMAC has strong suspicions that at least one or more of the major retailers in South Africa sells stolen macadamias,” says the report. It goes on to explain that although macadamias are the most expensive nuts globally, macadamias are the cheapest nuts at some retail stores. This, according to SAMAC, raises strong suspicions.

Stolen macadamias also pose a major health risk to consumers. “It has been established that stolen macadamias are often processed to kernel in extremely unhygienic conditions. Due to the labour-intensiveness of macadamia sorting, the risk for human pathogenic micro-organism contamination is high and extreme care needs to be taken when handling the nuts. In the USA, macadamias have the highest incidents of recalls by the FDA, due to Salmonella contamination,” warns SAMAC in the report.

In addition to the food safety risk, the report also states that the quality of the macadamias is of high concern. It explains that highly skilled people are used to sort macadamia kernels in processing facilities. “Commercial processing facilities also clean, dry and package macadamias with special prescriptions to ensure a good-quality product that is long-lasting. These precautions are not readily done with stolen macadamias and all these factors, from unfair competition to lower quality product, have a high impact and long-term effects on the macadamia industry. It is crucial for South Africa to be known for its superior quality macadamias in order to compete not only against other macadamia-producing countries, but also against other nuts,” reads the report.

At a local level, macadamia theft also has a huge impact on job creation and poverty alleviation. “For every 3.5 hectares of macadamias planted, one permanent farm worker is employed, and for every 4 hectares, a seasonal worker is employed. Furthermore, many people are employed in processing facilities and the growing nursery industry. With already more than 30 000 hectares established and production of approximately 42 000 tons in 2017, the industry employs an estimated 9 317 permanent workers. In addition, employment is given to 9 245 seasonal workers for at least five months per annum (13 169 full-time equivalent jobs),” states the report.