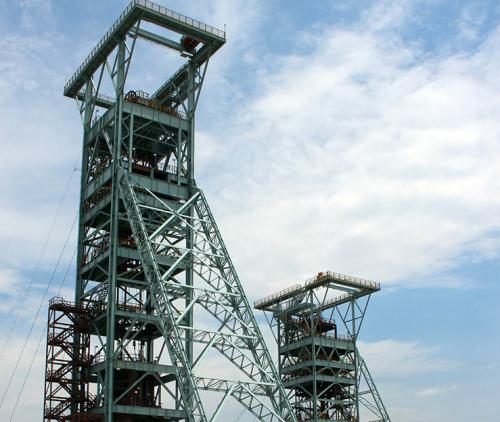 The two shafts, a production and service shaft, currently under construction at Venetia Mine which will enable the mine to do steady-state underground mining from 2026. This week, the shafts touched on 600 metres, more than halfway to it final depth of 1 040 metres.

Venetia Mine on track for early underground production

De Beer’s Venetia Mine is in the process of transformation as they gradually transition from open pit mining to underground mining.

The Zoutpansberger was invited last week to experience the day-to-day operations at the mine as they prepare themselves for the final shift from open pit diamond mining in 2023 to steady-state underground diamond production in 2026.

“The project is on track and on target to start delivering a little bit sooner than what we initially anticipated,” said Mr Christoff Kuhn, Head of the Venetia Underground Project (VUP) during a media briefing last Thursday.

Since Venetia Mine opened on 14 August 1992, the mine has become a household name in the Soutpansberg. Situated some 80 km from Musina and 35km from Alldays, the mine is one of De Beer’s biggest. With an annual production of about 4.5 million carats of diamonds, Venetia contributes to 30% of South Africa’s annual diamond production and 3% to the annual global diamond production.

The underground project forms part of a US$2 billion investment by De Beers into Venetia Mine and will expand the life of the mine by at least 20 years from 2023 until 2045. It is the biggest investment ever by the De Beers Group into new production.

As part of the underground project, there will be several “firsts” not only for De Beers, but also Venetia Mine.

“When it comes to automation, we are not going to let Venetia stay behind,” said Kuhn. He said that they have already adopted a lot of the new technologies which can be bought off the shelves from an automation perspective. “We are probably the first mine in the world that I am aware of that is actually going to implement all of these technologies concurrently,” said Kuhn.

What it basically comes down to is that Venetia Mine will make use of autonomous/unmanned machinery inside the mine which is remotely controlled from a surface control room. The machinery to be used include automated long-hole drilling, automated loading with limited interaction from a human perspective and automated haul trucks. This will all assist the mine in reaching their goal of treating 5.9 million tons of ore annually.

Automation from a business point of view makes a lot of sense, as well as being a key driver from a safety perspective for Venetia Mine as their number one core value. It, however, immediately sparks the questions whether it would lead to job losses.

“We have done the analysis. The overall job reduction is actually quite insignificant. We are talking less than 5% potential reduction in labour with automation coming in. However, the skills that we require in order to do that provides us with the opportunity to develop our existing workforce. The net effect is actually quite positive from that perspective,” said Kuhn.

Kuhn further explained that while there will be a slight reduction in employment in the long term, current employment levels at Venetia, which consists of a combination of employees and contractors, will be maintained in order to sustain the current open pit operations as well as developing the future underground project.

Currently, Venetia Mine employs 1 353 employees of which 858 is local labour. If the contractors are included, the number is approximately 3 800. In its 25 years of existence, the mine has established itself as a major player regarding employment opportunities and skills development. Year to date, the mine has created 146 new jobs through enterprise development. During the same time, 14 new suppliers were developed, while Venetia also assisted in the development of 16 SMME’s. The amount spent on these developments totalled R2.6 million this year alone, while loan funding totalled R674 000.

From the above it is clear that Venetia Mine takes it social responsibility very seriously and do not just pay lip service. During 2017, Venetia Mine also invested R42 million in employee training and development, training 2 728 employees.

“The current forecast is that we are going to carry the labour numbers relatively straight through. We obviously foresee a period where we will have a significant number of contractors required to establish the underground mine, so we will have a ramp-up for a period of five to six years, and then it will start tapering off from 2022,” said Kuhn.

Mr Gerrie Nortjé, General Manager of Venetia Mine, added to this. “Our strategy is to transition our employees to underground. We are doing everything in our power to ensure the skills level is correct and that we re-train where possible so that we can transition the existing workforce into the underground space. In some cases, people will retire and some employees will choose not to go underground. We do anticipate a change in the level of skills required but that is a reality that we have to face, and our strategy now is to build capacity and transition our labour across.” said Nortjé.

Apart from the two vertical shafts, construction of the decline ramp that comes down from the top of the mine is also in an advanced state. “We use the ramp system in order to actually establish the top of the mine. We will mine from the top down. We also included a sacrificial ramp into the pit and that will facilitate production from 2021, which is two years earlier than initially anticipated,” said Kuhn.

The massive diamond sorting plant at Venetia Mine. The mine is the biggest producer of diamonds in South Africa, contributing 30% to the country’s annual diamond production.

Apart from the two vertical shafts, construction of the decline ramp that comes down from the top of the mine is also at an advance state, last week totalling 2 622 metres.