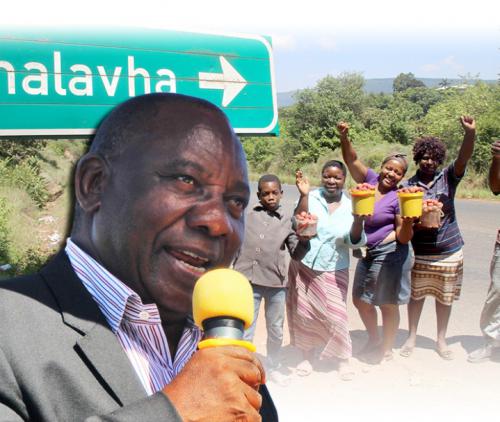 Our Cyril is the new ANC president

Newly elected ANC president Mr Cyril Matamela Ramaphosa might have been born in Soweto, but his roots are embedded in the rich soil of Khalavha, an underdeveloped village outside Thohoyandou.

When Ramaphosa visited the area a few weeks ago, he made sure to visit the people who had influenced his life. He was well received and was endorsed by traditional leaders and local churches offering him prayers. He found the much-needed support when Vhavenda King Toni Mphephu Ramabulana endorsed him and pledged him all the necessary support.

It was not surprising that residents of Khalavha and surrounding villages were glued in front of the television the whole of Monday, awaiting the ANC general conference’s results. As soon as the results were made known the whole community broke into song and dance, rejoicing about the elevation of one of their own to the highest position in one of the oldest liberation movements.

Many know Cyril as a Soweto resident, but not that much is known about his early life in his home village of Venda. Limpopo Mirror traced the politician’s family at Khalavha and found family members in a celebratory mood.

“We are very humbled as a family to have one of us being elected to such a very high position. We are royals from the Tshivhase family and his upbringing in a Christian family will stand him in good stead to take this country forward,” said his brother, Ben Ramaphosa, on behalf of the family.

Ben said that his brother had shown leadership qualities from a very early age. “He was school prefect and also the president if the SCM while doing his Grade 12 at Mphaphuli Secondary,” he said.

Cyril was born on 17 November 1952 in Newclare in Gauteng. The family later moved to Chiawelo in Soweto. He did his primary education there and moved to Venda for his high school tutoring.

Ben added that he grew up under strict Christian supervision as his mother was a staunch member of the Lutheran Church. "We have no doubt that this man has the capacity to make a difference in this country."

Another resident of Khalavha and a person who grew up alongside Ramaphosa is Dr Tshenuwani Farisani, the Speaker of the Limpopo Provincial Legislature. Dean Farisani reckons that the people of South Africa have not made a mistake in electing Ramaphosa as leader.

“I have known this man since many years ago while he was a student at Mphaphuli, where his political career started as a student activist. He invited me to address students. We worked together at CODESA and we used to visit each other and his family at Chiawelo,” said Farisani.

“I am very happy that South Africans were able to spot leadership that will take this country forward. I believe he will make a big difference and will unify the ANC. There are challenges in the organization, but he is equal to the task. He is a capable leader,” said Farisani. He said former president Mandela had not made a mistake when he wanted him to be his deputy as he saw capacity and capability in him.

“Ramaphosa is one of the most decisive leaders. He is a leader who cares, one of the greatest negotiators of our times. This also shows that one does not need to be born in an affluent area to be a leader,” he said.

The local traditional leader, Chief Mpfuneni Tshivhase, said Ramaphosa had put their village on the world map. “We are a little-known people and village, but since he was elected we have been mentioned time and again. We are a poor village with no development at all and we hope he will look at this and see what to do to improve the lives of the locals,” he said.

Dr Tshenuwani Farisani, who saw Ramaphosa growing politically from high school to where he is today.

The community of Khalavha is hopeful that life will change for the better in their village because the president is from their village.

Ramaphosa's brother, Ben, says he was destined to be a leader as he showed leadership skills from an early age.

Dr Tshenuwani Farisani, who saw Ramaphosa growing politically from high school to where he is today.