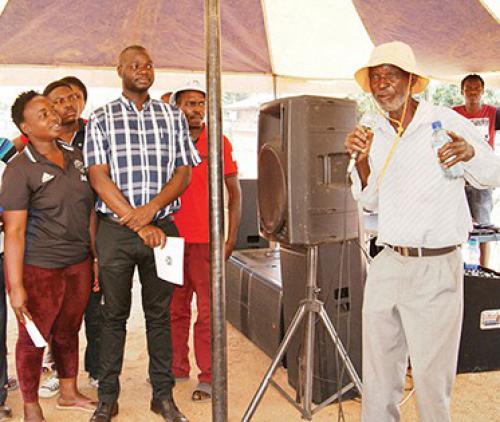 A community member raises a point, while other members of the public queue to air their views during the mayoral imbizo.

Musina is paying back the Eskom debt

Local community members are happy that the Musina Municipality is servicing its Eskom debt with the urgency it deserves.

This was revealed during the Musina Municipality Ward 2 mayoral imbizo that took place at Musina last week. Mayor Mihloti Muhlope gave a service-delivery report and updated community members on the progress of the municipal Eskom debt.

“When this Council took over two years ago, the municipality was owing Eskom over R140 million. Last year, we reduced the debt to R100 million. In May this year, Eskom issued a notice that we were owing R72,2 million. In July, our debt stood at R53,6 million. As I’m standing before you here today, the debt is standing at R35 million. We will pay it off at the end of March next year.”

Muhlope encouraged community members to use the various available platforms to communicate with the municipality. “What we are doing here today is a confirmation that we put our people at the centre of development. We need your views to be able to deliver services efficiently. Lately, we had another successful imbizo at Lesley Manyathela Stadium where local community members came in large numbers to contribute in the decision-making processes of the municipality.”

She said the local people were very lucky because the municipality had effective communication platforms. “We are one of the best municipalities that is doing very well in terms of communications. Besides the imbizos, we have monthly ward meetings, IDP representative forum meetings, a website, Facebook, bulk SMSs, to name but a few. The most important thing is for you to use these channels to the maximum. This will make our work easier because you will be knowing how the municipality operates.”

She said issues raised by the community members wouldl be attended to as a matter of urgency.  “Those that are not of our competency will be referred to the relevant departments and stakeholders for urgent attention.”