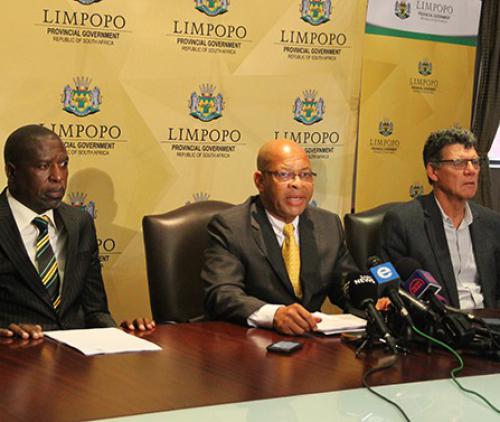 Photographed during Tuesday's press conference are the ANC provincial  secretary, Soviet Lekganyane, Premier Stan Mathabatha and the MEC for the Treasury, Rob Tooley.

Mayors get the boot over VBS scandal

“We want to see arrests, successful prosecutions and serious jail terms for all those who have violated the law.”

The words of the Limpopo Premier during Tuesday’s press conference sounded hollow but may spell out the direction that will be followed in the next few months. Premier Stan Mathabatha announced that six of the province’s mayors would be removed from their positions with immediate effect. A seventh mayor, Florence Radzilani, resigned as Vhembe’s mayor shortly before the press conference.

The dismissal of the mayors is a result of the VBS Mutual Bank scandal. The mayors were all at the head of municipalities that invested billions in the mutual bank. The investments were done in violation of the Municipal Finance Management Act and the allegations are that many of the officials and politicians benefitted from kickbacks received from VBS. The total amount that was invested by Limpopo municipalities in VBS was R2,6 billion, of which just more than R1,08 billion is still outstanding.

During Tuesday’s press conference, Premier Mathabatha was accompanied by the MEC for the Treasury, Rob Tooley, and ANC provincial secretary Soviet Lekganyane. The report and recommendations of the forensic investigation into the VBS investments were made public. The recommendations were, in short, that disciplinary action be considered against the municipal managers (MMs) and chief financial officers (CFOs) of the various municipalities that invested at VBS.

Lekganyane said that mayors had had the executive authority in the scandal and must therefore face the consequences.

Vhembe’s executive mayor, Florence Radzilani, pre-empted the announcement and resigned on Tuesday morning. In her letter of resignation, she again professed her innocence. “I was not involved (in the) VBS municipal investment, both officially and privately. I leave the office with a clear (conscience) after being vindicated by the two forensic investigations, namely Paradime Forensic investigators and Premier Mathabatha’s forensic report,” she said.

Radzilani, who was also the deputy-chairperson of the ANC’s provincial executive, proved to be a major headache for the ANC. Her municipality invested more than R1 billion with VBS, of which more than R300 million is still outstanding. She was mentioned in the SA Reserve Bank’s report on the shenanigans at the mutual bank. A conversation between the then chairman of VBS, Tshifhiwa Matodzi, and Kabelo Matsepe (described as “a politically connected fixer”), was published in the report. This conversation implied that Radzilani wanted more money to keep investments at VBS. Radzilani denied the allegations.

To further complicate matters, a phone recording surfaced earlier this year wherein Mathabatha is alleged to have professed his love for Radzilani. This caused an extremely awkward situation, seeing that the premier was now asked to implement a directive of the ANC’s national executive committee (NEC) to remove the mayors, including Radzilani, from their positions.

In October this year, the MM of the Vhembe District Municipality (VDM), Mr Reuben Rambado, and the municipality’s CFO, Mr Nyiko Mchavi, were suspended during a special sitting of the council.

Mayor Shonisani Sinyosi was not spared and she also received her marching orders. Makhado Local Municipality (MLM) invested R150 million with VBS, of which just more than R53 million is still outstanding.

The premier’s report proposes that disciplinary action be taken against the municipal manager at the time, the CFO, the revenue manager and the municipality’s assets manager. It further proposes that legal steps be taken to try and recover money from the individuals concerned who had authorised the investments.

During a special council meeting at the end of October, it was decided to suspend the municipality’s former acting MM, Johannes Kanwendo. In MLM’s case, doing so is slightly more problematic, seeing that the municipality had had a number of acting MMs, following the suspension of Sakkie Mutshinyali in 2016.

The first VBS investment (R15 million) by the MLM was made in mid-2016. In 2017, three further investments were made, totalling R140 million. During this period, the CFO was Mikateko Palesa Makhubela. She resigned early in 2018 to take up a position at the Greater Tzaneen Municipality, where she is still the CFO. Currently, the acting CFO at Makhado is Godfrey Raliphada.

In December last year, Freddy Tshivhengwa was appointed as MM. Before Tshivengwa’s appointment, different officials acted as MM. On 17 October 2017, Chris Kharidzha was listed, but for most of 2017, Johannes Kanwendo’s name appeared next to the title of acting MM.

At Collins Chabane Municipality (CCM), the mayor who received the boot is Joyce Bila. This municipality apparently only joined the VBS queue a bit later, but still invested R120 million. The full amount is still outstanding.

As is the case with the other municipalities, the premier’s report recommended that disciplinary action be taken against the MM and the CFO. At the end of October, this municipality also opted to provisionally suspend the officials involved. They are the CFO, Mr Eddy Makamu, and the MM, Ms Tsakani Ngobeni.

During Tuesday’s press conference, Mathabatha said that the axed mayors would be redeployed “elsewhere”. This caused an immediate outcry from the opposition Democratic Alliance (DA). In a press release, the DA’s provincial leader, Jacques Smalle, said that the ANC officials should not be “recycled” but should face the full might of the law. “We will not stand for the redeployment of these cadres and every single person who currently is still employed by the government should be shown the door immediately,” he said.

As far as the replacements of the various mayors are concerned, the premier did not want to say much. “The ANC is busy working on the matter and, hopefully, the acting mayors will soon be appointed,” he said.