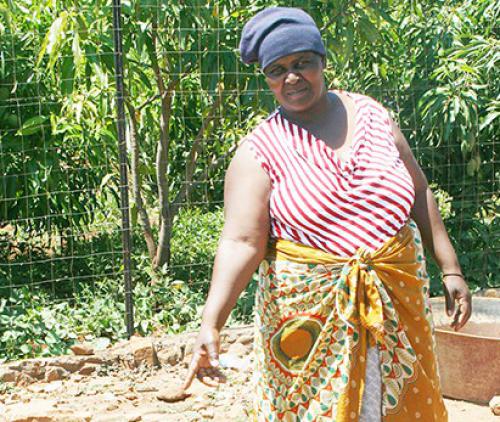 Ms Joyce Matodzi, aunt of the deceased Rudzani Matodzi, points at a pool of blood where she found her nephew.

One stabbed, three burned and stoned to death

Ramavhoya village in the Nzhelele area had a rude awakening on Saturday, when a man was killed in a robbery and three men were later allegedly murdered by a mob.

A 29-year-old man, who was identified as Rudzani Matodzi, was found dead in a pool of blood outside his home. He was allegedly stabbed to death and robbed off his sneakers and cellphone. After the discovery of his body, members of the community mobilized and started hunting for his alleged killers.

According to reports received, they captured three men and took them back to the spot where the deceased was found, stoned them and burned all of them to death.

According to Limpopo police spokespersons Col Moatshe Ngoepe, the process of identifying the three deceased is still unfolding. “Four cases of murder were opened for further police investigations and suspects involved in this incident are still unknown.”

He asked members of the community with information to come forward. They can phone the Crime Stop number 0860 010 111 or the Crime line SMS 32211 or the nearest police station.

The Limpopo commissioner of police, Lt-Gen Nneke Ledwaba, has condemned the recurring incidents of mob attacks and killings that are still prevalent in some parts of the province. “Members of the community are warned to refrain from taking the law into their own hands. The police must be given space to deal with any criminal acts without them resorting to violence,” he said.

Mr Rudzani Matodzi, was stabbed to death in a robbery.