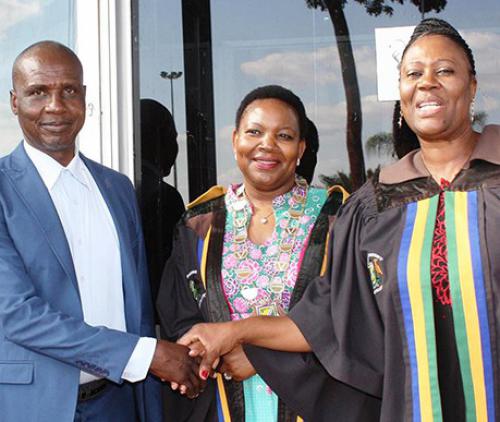 Thovhele Alone Manenzhe (left) and the Speaker of the Vhembe District Municipality, Cllr Freda Nkodo (right), join hands with the newly elected executive mayor of Vhembe, Cllr Mavhungu Lerule-Ramakhanya shortly after she was sworn in.

The new executive mayor of the Vhembe District Municipality (VDM), Cllr Mavhungu Lerule-Ramakhanya, promised to start addressing the challenges facing communities such as shortages of water, high rate of unemployment, poverty, nepotism and corruption as soon as she starts working.

She is a former mayor of the Makhado Municipality.

According to her, the councillors of the VDM are committed to ensuring that every community has access to clean and potable water. “In order to restore the dignity of our people, the best practices need to be adopted to speed up the rollout of sanitation facilities, particularly in rural areas. I also commit myself to ensuring that every community member enjoy access to basic services,” she said.

She was speaking on Friday in the Thohoyandou Parliamentary buildings, shortly after being elected during the special council meeting. It follows the resignation of Mayor Florence Radzilani after she was identified as a benefactor of the VBS Mutual Bank scandal.

Lerule-Ramakhanya was later sworn in as executive mayor of the VDM by Judge Frans Kgomo of the Limpopo High Court in Thohoyandou.

She said that she was accepting the responsibilities to lead and committed to ensuring that every community enjoy access to basic services. She further said that she would work together with the opposition parties for the common cause of serving the people.

Thovhele Alone Manenzhe said in his congratulatory message that the traditional leaders in the region would support the new executive mayor and would work with her during her tenure.

A community leader, Mr Thabelo Nalana, said he hoped Lerule-Ramakhanya would help to deliver better services to the communities in the Vhembe region. A representative of the Democratic Alliance in Vhembe, Mr Joseph Mariba, said that they warmly welcomed Luruli-Ramakhanya to lead, but urged her to work without taking any side or favour.