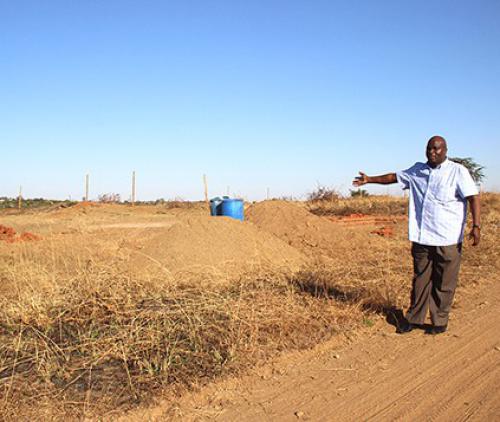 Court orders the Netshivhale to stop

This has not only happened in rural settings, but also in towns, where unsuspecting land seeks are duped into buying portions of land in areas owned either by municipalities or private owners.

A few years ago, thousands of unsuspecting land seekers lost thousands after paying money with the hope of buying building sites at the Baron's Chicken Farm about 15 km from Louis Trichardt. They have not been refunded.

Recently, nearly 1 000 site seekers purchased sites at Dzwerani-Mvelaphanda in the Lwamondo area. The sites, which are in dispute and were sold from R8 000 to R15 000, were sold by the Netshivhale royal family who purport to be the rightful owners of the land.

The Nelwamondo traditional authority have been granted orders on numerous occasions against certain individuals in the Netshivhale family by the Thohoyandou High Court that no development should continue in the area.

The orders started in 2015, but the Netshivhale continued selling sites and developing the area.

The latest order was granted at the end of November this year, when the High Court dismissed the application by respondents Ntambudzeni Netshivhale, Lawrence Netshivhale, the Minister of Police and the Vuwani station commander with costs.

According to the order, which is in possession of Limpopo Mirror, the respondents Ntambudzeni Netshivhale, Lawrence Netshivhale and the Vuwani station commander were declared in contempt of the 2015 order granted by Judge Joseph Raulinga.

The three are to be imprisoned for one month and the imprisonment wholly suspended for three years on condition that the respondents comply with the 2015 order by Raulinga.

The order also states that, should any of the respondents ignore or fail, refuse or neglect to act in accordance with the 2015 order in any manner, such respondents be summarily taken into custody and imprisoned.

Lwamondo traditional authority spokesperson Mr Pedron Nndwa said the courts had vindicated them. "We have tried all to explain to the unsuspecting site seekers to stop paying money and stop building in the area as it was illegal. They refused to listen, but we are happy the courts have come out in our favour. What is happening now is that we have approached the court to grant us an order to demolish all structures in the area as they are illegal. These people disregarded court orders. They have to taste their medicine and we will not be merciful as we have warned them," he said.

The Netshivhale have indicated through their lawyers, VM Netshipale Attorneys, that they will be challenging the outcome of the court case.