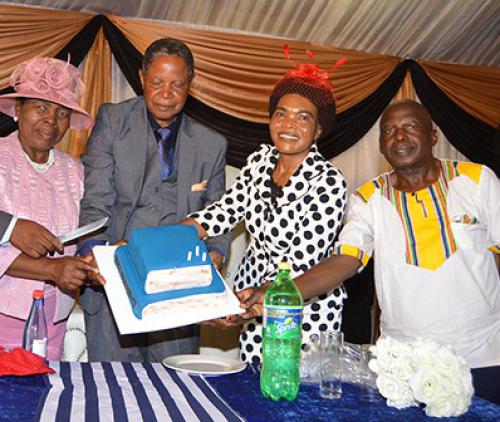 Family members celebrate the retirement of one of their own. From left are businessman Aubrey Mulaudzi, Ms Mulaudzi,  Mr Samuel Mulaudzi, Ms Julia Mashavha, who represented the Vuwani principals, and Vhavenda Vho-Vhangani Mulaudzi of the Tshimbupfe royal authority.

Dedicated educator bows out after 42 years

Samuel Mulaudzi was the first teacher in his family and his dedication to his work inspired many in the family and community.

After 42 years of active service as an educator and principal, Mulaudzi, from Tshimbupfe in Vuwani, bowed out of teaching and is now enjoying a well-deserved rest.

The hardworking and dedicated Mulaudzi produced many professionals during his time, among them prominent attorney Ronald Muthambi and businessman Mr Lufuno Mphaphuli.

In acknowledgement of his good deeds, both in the family and community, a mammoth send-off party was held at the local Vuwani Faith Mission Church hall on Friday. Speakers at the event praised the way Mulaudzi worked in developing his learners and also his community.

On behalf of the Vuwani principals, Ms Mviseni Julia Mashaba, described Mulaudzi as an elder in the teaching fraternity whose experience they would all miss. "We learnt a lot from him and we acquired a lot of skills and experience from him. He was committed to team work and unity," she said.

Family spokesperson Mr Aubrey Mulaudzi said his brother was an inspiration and unifier to the family. "As the first teacher and principal in the family, he encouraged us all to take education seriously. He taught us many things, like saving for the future, which we are still doing today."

On behalf of the Netshimbupfe Royal Family, Vhavenda Vho-Vhangani Mulaudzi urged everyone to follow in Mulaudzi’s footsteps by encouraging education wherever they are.

In response, Mulaudzi said it was a mixed occasion for him as he was leaving the job and people he liked and, at the same, he was thinking of resting at home and waking at a time of his own choosing. "I dedicated my life to this job and really enjoyed it. I have done my bit in developing this area and I think after so many years it is now time to rest. I will miss my work and my learners and staff, who had become my second family," he said.