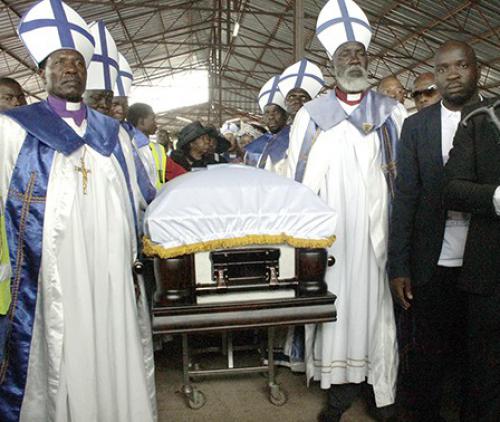 Senior members of the church carry the coffin of the late Archbishop Miriri.

The late archbishop Elias Miriri of the United African Apostolic Church (UAAC) was laid to rest at his home village of Ha-Mavhunga in Nzhelele a fortnight ago.

He died after a long illness died on 23 December at his home. Many mourners from SADEC, including Min Gwede Mantashe, deputy ministers, MECs and traditional leaders, attended the funeral.

Miriri was buried during a moving but celebratory ceremony at his home village of Mavhunga. Although the atmosphere was subdued, the ceremony resembled a celebration of a life well lived. Three days before the burial, thousands of people gathered for a memorial service in his honour. It was held in the same church.

The UAAC is one of the country’s largest African indigenous churches, with about two million members. Miriri was the leader of the church for more than 40 years.

The Miriri family stated that the archbishop had sacrificed his life for the benefit of the community. Family representative Dr David Miriri said his brother had been their role model. "He was the shining light of this family and the community at large. He taught us respect, perseverance, love and peace. We will be indebted to him forever," he said.

Chief Livhuwani said that the community members would always remember Miriri because of his huge contribution towards the establishment of the many branches of the church on the African continent.  “We stand here today as a strong church because if our spiritual father,” said the church’s spokesperson, Mbulaheni Nenzhelele.