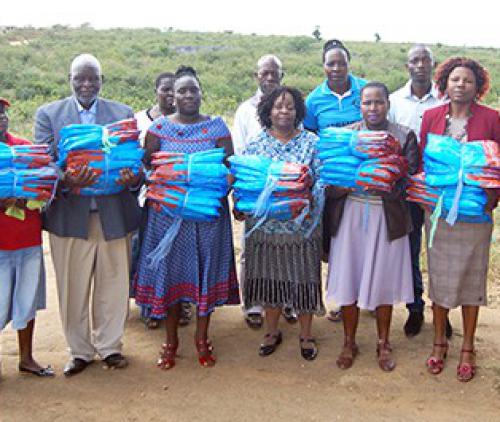 “We are happy to say: Goodbye malaria!”

This comes after Munna Ndi Nnyi, in association well-known singer and humanitarian Yvonne Chaka Chaka and her Princess of Africa Foundation, had learned of malaria cases that had been reported in Vhembe District and decided to make a difference to people who lived in those areas.

“We were very touched and disturbed by cases of malaria that were reported here in our district, and we knew that unless we came together and did something about it, no-one else was going to come to us and help,” Munna Ndi Nnyi's director, Dr Bardwell Mufunwaini, said. “There were some deaths as well in the affected areas. We can now do something to prevent possible malaria infections, which sometimes lead to deaths.”

Packages of mosquito nets were handed over to village representatives, who would then see to it that they were distributed to deserving households. The villages are Tshilaphala, Manavhela, Mudziafara and Tshitungulwane.

A representative of the communities, Ms Muvhulawa Mufamadi, said that they were glad that the organisation had made a difference to their lives. She indicated that the mosquitoes were so many in the villages and that the mosquito nets would bring them a relief from living with constant fear after each mosquito bite. “We have seen it that there are people who care about us,” she said. “We thank Munna Ndi Nnyi and Yvonne Chaka Chaka for being this kind. Now we are happy to say goodbye to malaria.”

Mufunwaini stated that they had a list of villages affected by malaria that they got from the Department of Health and that they would be using that list to distribute the mosquito nets.

Ms Yvonne Chaka Chaka said that the foundation had been created to work with the community. "I am very pleased and honoured about the contribution made in this regard," she said. "We are also humbled to have done the same to our brothers and sisters in Mozambique. We extend our special thanks to Munna Ndi Nnyi and Toyota Polokwane who helped out with logistics."