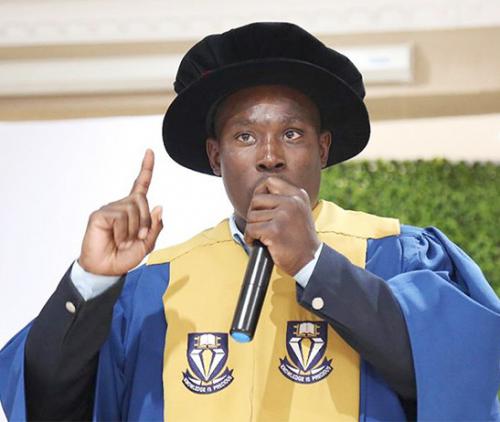 The University of Venda held the official inauguration of the student representative council (SRC) and the SRC president at the Kalahari Waterfront in Nandoni, Ha-Budeli, last Monday.

During the ceremony, the vice-chancellor and principal, Dr Bernard Nthambeleni, said that the inauguration ceremony was a very important event where all members took oaths that they would serve the students’ interests, irrespective of situations that they came across. “We implore you to follow the ethical theory of leadership. Conduct yourselves in accordance with the university rules and regulations,” Nthambeleni said.

According to him, the SRC is an integral part of the university’s governance structure. "The university senior management will engage with SRC members to make Univen one of the best universities in the country. Univen should be known as a student-centred university where the focus will be on students. We want to produce better graduates," he said.

He told the SRC members to inspire confidence in their fellow students. "Be good listeners because good leaders are good listeners. Practice servant leadership; you are asked to serve the students. You are here to lead and to serve other people. You don’t represent yourselves but represent the students. Work together as a team, irrespective of political parties that you are representing,” he said.

The SRC President, Mr Tsundzuka Hakamela, told his “cabinet” members to serve the students wholeheartedly and with pride. “Let us work and give other students a chance to also make a mark,” Hakamela said.

He said that various projects were in the pipeline that would make the students happy. “We are in the process of bringing better food outlets to campus. We will also make sure that there are platforms where students can meet and engage with each other," he concluded.