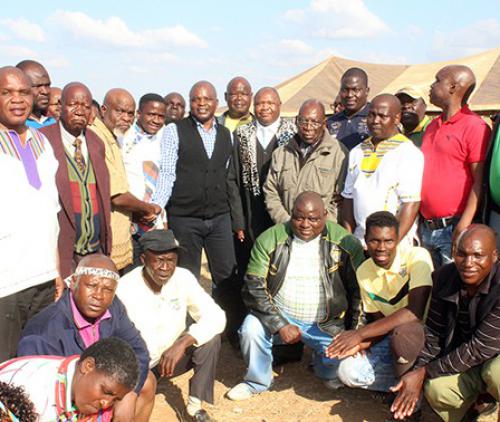 Limpopo PEC member and well-known traditional leader Mailausumbwa Kennedy Tshivhase has called on residents of Davhana outside Vuwani in the Collins Chabani municipality to continue supporting the ANC, “as it is the only organization that has the capacity to bring a better life for all”.

Tshivhase, who had brought along a big tshikona dance group that he led to the pitch for a performance, was speaking during a thank-you rally in the area.

The rally, organised by the Alex Nemadodani branch of the ANCYL in the area, took place at the Balanganani sports grounds on Saturday. The event was attended by councillors from the Collins Chabani Municipality, ANCYL leaders led by Mr Ramabulana Nesengani, the local senior traditional leader, Thovhele Jerry Davhana, who handed a gift to Mailausumbwa that is to be presented to Pres Ramaphosa.

Speaking during the celebrations, Tshivhase called on the community to continue supporting the ANC. "It was not easy campaigning in Vuwani, but the people here were determined to make a mark and vote for their favourite organization. We are back here as promised to come and say thank you for coming out in your numbers and voting for the ANC.”

He further called on the residents to work in unity and resist leaders who are trying to divide the community along tribal lines.

The local traditional leader, Thovhele Jerry Davhana, urged Tshivhase to continue to strengthen the relationship with the people of Davhana.

Tshivhase also received some agricultural products produced in the village. Those who attended the event were entertained by tshikona and shigubu dances.