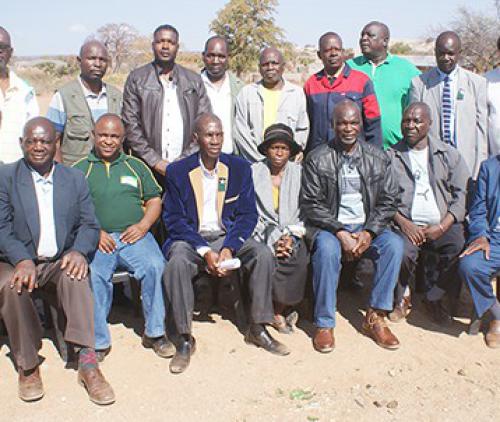 The different community structures and officials from Anglo Explorations that gathered for the consultative meeting at Zwigodini over the weekend.

Hope for jobs as Zwigodini Madifha mine is set to reopen

The senior traditional leader of Tshikundamalema, Thovhele Hanyani Tshikundamalema, said the revival of the currently defunct magnesite mine at Zwigodini Madifha was what the community had been waiting for for years.

Tshikundamalema was speaking during a consultative meeting between the different community structures and officials from Anglo Exploration Holdings Pty Ltd. The company, led by businessman Mr Ernest Mammba, is set to revive the mine and has since received the acceptance letter for their application for a prospecting right in the area by the Department of Mineral Resources.

In a communique dated 7 July 2019, the department confirmed accepting the company’s application for prospecting a right for magnesite, silver, manganese, tin, zinc, gold, iron, limestone, copper, chrome and diamonds, among others. Several steps need to be followed, however, before the mine can be reopened and consultation is one of them.

Speaking during a meeting held at the local sports grounds, Thovhele Tshikundamalema said the mine, which had employed many locals, had closed shop many years ago, leaving the community poorer. “This is good news for our people, and we have waited for far too long for people like you. As things stand now, we are very positive with the spirit of working together shown. This will go a long way towards improving the lives of our people,” he said.

Anglo Exploration Holdings' Ernest Mammba said they felt they should have a good start with the community as prescribed by law and that he was happy with the way things had gone. “We are very positive and excited by the warm welcome we received from Thovhele Tshikundamalema and his structures. Here we see a leadership with vision, and with the outcomes of today’s meeting, there is no way we can fail in creating employment for the people. We anticipate creating thousands of jobs for locals,” he said.

He further indicated that the consultative meeting had been just the start of a series of fruitful meetings to be held in the community.