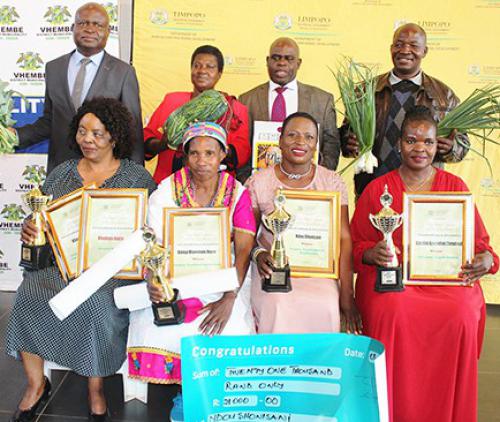 The Department of Agriculture and Rural Development (ARD), in partnership with the Vhembe District Municipality (VDM), began with the celebration of Women’s Month by handing over awards to the top female farmers during a ceremony at the Dzanani Community Hall near Nzhelele last Thursday.

The winner of each category received R41 000, those in second position R31 000, third positions R21 000 respectively and the overall winner of the competition received R49 000.

Ms Eunice Matukane from the ARD said the Female Farmer of the year Awards were incepted by the department in 1999 to encourage and increase the participation of women in agricultural activities. Matukane said this annual event commenced at local level of the municipalities, the districts, provincial level and culminated with the National Female Farmer of the Year Awards taking place at the end of Women’s Month.

Speaking during the event, the executive mayor of the VDM, Cllr Dowelani Nenguda, called upon commercial farmers to play a role in the emancipation of women in the agricultural sector.

The overall winner, Ms Joyce Khodoga of Matanda Poultry Farm in Makhado, was overjoyed with the award. She said that she would use the funds she received from the competition to advance her business and help create jobs for jobless people.