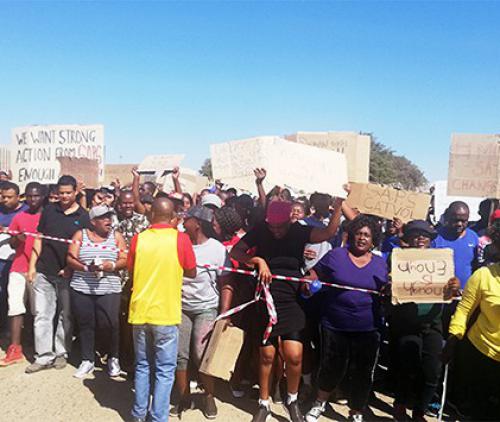 Angry community members march to the Musina Police Station on 19 July this year.

With crime spiralling out of control in the border town of Musina, residents recently took to the streets to voice their anger. It would seem that their cries for help did not go unheard.

During a protest march held on 19 July, the community handed over a memorandum to the police for the attention of the Minister of Police, minister Bheki Cele. In the memorandum the community minced no words in explaining the current lawless situation in their town. “Crime levels at Musina has now reached national crisis levels with even the police meant to protect us in cahoots with criminal elements. Organized criminal elements operate with impunity knowing that they have the protection of the police,” stated the memorandum. It also touched on cross-border crime. “Cross-border crime is threatening the national security of the country and the local police service has degenerated so much that we are literally at the mercy of criminal elements with robbery, rape and murder rampant,” the memorandum stated.

Because of the growing state of lawlessness, residents placed the cause of this directly before the door of the police, calling for the immediate removal of the Musina police station commander, Colonel S Munzhedzi, and his deputy, Lieutenant Colonel H F Mahafha. They further asked Minister Cele to visit Musina urgently to see for himself what the current situation in this border town is and gave the police 14 days to respond to their memorandum.

Provincial police spokesperson Brigadier Motlafela Mojapelo on Wednesday said that Colonel Munzhedzi had since been replaced with Colonel M S Mukwevho, who previously served as the Deputy Cluster Commander of the Makhado cluster. Mojapelo confirmed that a document was made available to the Musina community on August 5 in which the removal of Munshedzi is announced. In this document it is stated that Munshedzi will be replaced on 15 August. “Mukwevho is already there,” said Mojapelo.

As for the community’s other demand to have Lieutenant Colonel Mahafha removed, the feedback document states the he “will be replaced very soon.”

In the feedback document, the police reaffirms their commitment to Operation Vala Madi on the borderline. “This operation is playing a vital role in combatting cross-border crime. The Beitbridge Border Post SAPS’ members are now deployed in Musina on a daily basis to assist with high visibility and the prevention of crime,” the document states.

In addition to the above, the police stated that Tactical Response Team (TRT) and Public Order Policing (POP) members will be deployed in the Musina policing area three days before the end of the month and three days after the end of the month to address the high number of trio crimes committed over these periods. The two N1 patrol vehicles, which were boarded in 2016, will be replaced in the 2019/2020 and 2020/2021 financial year. “The current Crime Intelligence structure will be supplemented when the new district structure comes into operation later this year … The police chopper is based in Polokwane and is available from crime fighting in [the] Musina area upon request and subject to availability,” read the police’s statement.

As for long-term planning, the police stated that they are working on a plan at cluster level in co-operation with the community to address the crime situation. “Any co-operation and involvement of the community will be welcomed and appreciated. Strong community policing forums are a necessity in the effective combat of crime. The election of the new CPF committee will be conducted in April 2021,” said the police.

As for the community’s request for the Minister of Police to visit them it was stated that this request was forwarded to the provincial commissioner’s office.