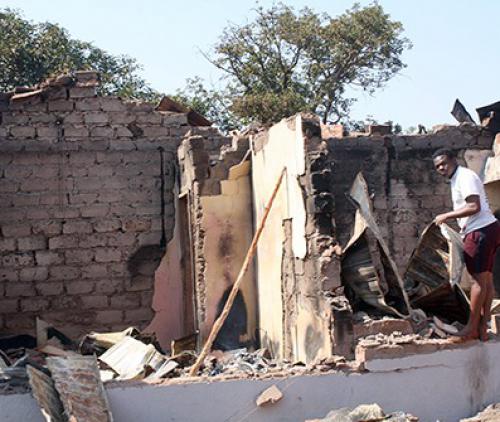 The house of Chief Nwedamutsu was set alight.

This came about after a meeting was held by community members during which alleged ritual murder incidents happening in Luheni-Mapuloni some few weeks ago were discussed.

In the latest case, villagers in the rural mountainous village of Luheni-Mapuloni near Tshixwadza under Ha-Rammbuda are upset after the discovery of the decomposed body of Mr Zwidofhela Isaac Ramarumo.

A community leader in Luheni-Mapuloni village, Mr Munyadziwa Thagamega, said the trouble had started when they had staged a meeting with Thovhele Ratshibvumo II Rammbuda at his kraal on Wednesday two weeks ago. According to Thagamega, during the meeting, Chief Samuel Nwedamutsu of Tshixwadza was allegedly seen preventing a chief of Luheni, Siaga, from revealing something.

The community members then suspected that Chief Nwedamutsu might know something about the death of Mr Zwidofhela Ramarumo.

Thagamega said the communities in Ha-Rammbuda were also worried because there were more than 10 cases of missing people in the area. Some were never found, while others were found dead. No arrest has been made, even though they had given the names of suspects to the local police of Mutale.

An eyewitness, who did not want to be identified, said the group of people had assembled at the chief’s kraal and started to pour petrol around the outside of the house. They also threw stones at the house and broke the windows. They then set the house alight. He said about six people had been in the house and they were lucky to have escaped.

Limpopo police spokesperson Col Moatshe Ngoepe confirmed that they had opened arson and public violence cases after the kraal was set alight on Tuesday night. “We are investigating, and we have launched a hunt for the suspects. We appeal to the community not to take the law into their own hands,” he said.