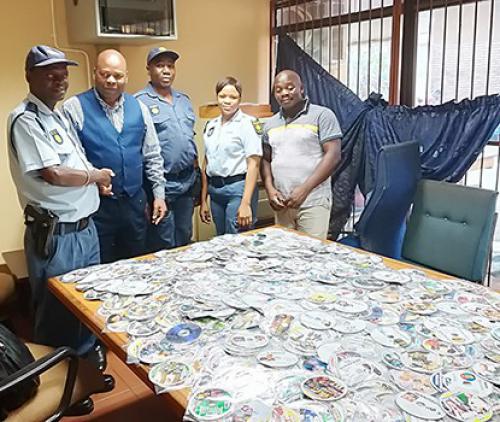 Thousands of fake CDs that have been confiscated by the police in Thohoyandou are displayed by the officers who conducted the raid.

The scourge of rampant pirating of music and videos in the Thohoyandou area is set to come to a standstill. This follows a police clampdown on hawkers selling pirated and fake CDs and DVDs who trade their wares at street corners and taxi ranks.

During an unannounced sting operation over the weekend, the police managed to clean the town of more than 3 000 fake music CDs and videos from hawkers known as Ma Ten Ten. They are known to charge as little as R10 per pirated copy of the best of local music.

About the operation, Thohoyandou police station commissioner Brig Willy Mashava said it had come to their attention that pirates had taken over the music market, with owners of the music no longer making any money and their businesses facing collapse.

“Piracy has a devastating effect on the economy of the country. Besides the economy taking a downslide, artists are suffering after working so hard to produce good quality music and getting nothing in return for their hard work.”

He added that many record companies and stores had closed shop as they were no longer making money, and thus many jobs were lost. “During the operation, we managed to confiscate thousands of these fake CDs and DVDs to show how rampant the scourge is,” he said.

Mashava called on the community to refrain from buying the fake music as this is a crime. “These illegal sellers need a market to make a business and the market is the general public. If we can all take a stand and not buy from them, the market will stop completely and this will signal the end of piracy,” he said.

Dr Roxley Masevhe of the Vhembe Music Forum commended the effort by the police to curb piracy. “We really appreciate the work done by the police, but it looks like it is too little too late, because a lot of harm has been done already. Police only got the small fish, but the big fish who are producing the fake music are sitting comfortably in front of their computers,” he said.

He added that the people who were duplicating the music illegally were the people the “police should start with and maybe we can beat the scourge. Artists are tired and are no longer producing any new music because they know they will not make anything from their labour”.

He urged the police to involve them when carrying out such operations.