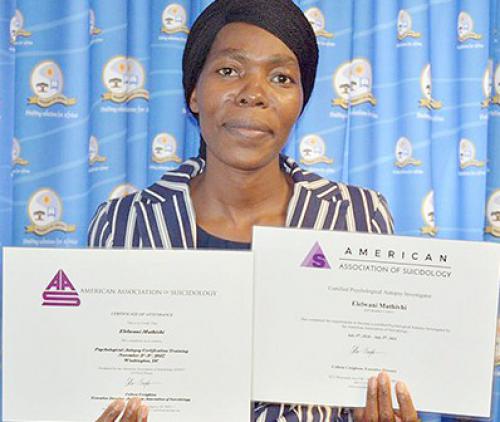 Ms Elelwani Muthivhi has become the first South African to be certified as a psychological autopsy investigator. Photo supplied.

Ms Elelwani Muthivhi, a PhD candidate in the Department of Psychology at the University of Limpopo, has become the first South African to be certified as a Psychological Autopsy Investigator.

Muthivhi, who hails from Makwarela, was recently certified by the American Association of Suicidology at the Chicago School of Professional Psychology in Washington DC.

In 2017, Muthivhi was the only African among a group of 14 delegates to the United States of America selected to receive training. "I feel very happy and humble to be the first South African to be certified as a psychological autopsy investigator," Muthivhi told Limpopo Mirror.

Muthivhi said her PhD study focused on psychological autopsies of male perpetrators and female victims of intimate partner murder-suicides in rural communities in Limpopo Province. "This study will help the people to know why an individual sometimes decides to commit suicide, what was happening in his or her mind, and the intention of taking a decision to commit suicide," Muthivhi said.

She will attend the 53rd American Association of Suicidology annual conference in April 2020 in Portland, Oregon, in the USA.