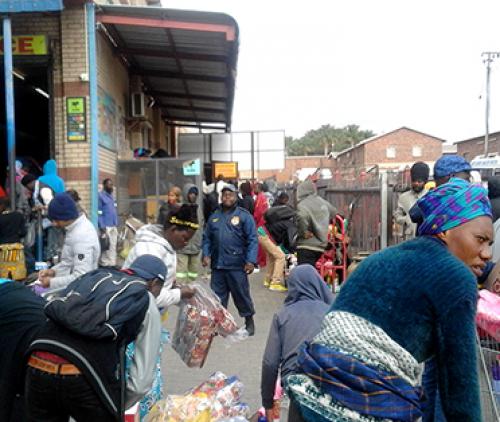 Zimbabweans wait to load their groceries into minibus taxis that take them back to Zimbabwe.

Business as usual in Musina amidst xenophobic attacks

While the waves of xenophobic attacks reverberated through the country over the past few weeks, business continued as usual in South Africa’s northern-most border town, Musina. Minibus taxis ferried people across the border every day and bakkies towing heavy trailers, fully loaded with groceries and other goods, headed north across the bridge.

Foreigners living in cities such as Pretoria and Johannesburg have been subjected to xenophobic attacks from locals over the past month. The attacks were seemingly in protest against crime, but the locals also complained about foreigners’ taking their jobs and running drug cartels in the local neighbourhoods.

The attacks on foreigners were condemned by politicians and caused counter-reactions in countries such as Nigeria and Kenia. Many local commentators described it as nothing more than thuggery driven by criminals, intent on looting the businesses of foreigners.

In the northern parts of Limpopo, the scourge of xenophobic attacks was fortunately a distant threat, at least for now. Last Saturday, shop owners in Musina were trading as usual, with hundreds of Zimbabwean buyers filling up their trolleys.

“My main customers come from Zimbabwe. If anything happens in Zimbabwe that stops them from crossing into South Africa, then I am in trouble. Business will be extremely slow. At times we are forced to close as early as 12:00, should we not get the Zimbabweans,” said a business owner trading in blankets, school shoes and school bags. He preferred to remain unnamed.

A security guard at another shop, SA Cash & Carry in Emery road, confirmed this. “Our customers are mainly from Zimbabwe. A few are from South Africa, but locals do not buy in bulk like Zimbabweans. Get inside and see for yourself how many Zimbabweans you will come across shopping,” he said.

SA Cash and Carry sells assorted groceries. At every shelf Zimbabweans were pushing big, fully laden trolleys. To get to the checkout tills, customers had to queue for between 40 and 60 minutes.

“I strongly believe that this would have been a dormant town if we were not buying from the stores. I make three trips from Gweru to Musina per week,” said one of the drivers while loading goods on a trailer.

From Musina Lodge, in an easterly direction, Zimbabwean taxi drivers park their vehicles in an open space, waiting to take their passengers back. Minibus taxis from places such as Masvingo, Chiredzi, Mutare, Harare, Rusape, Gweru and Bulawayo gather here.

“South Africans, before they engage in these ruthless exercises of killing foreigners, should think otherwise. We encourage them to really engage with foreign nationals,” said one of the minibus taxi drivers from Rusape.