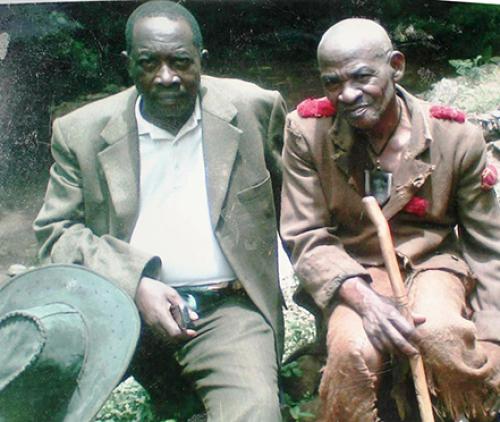 From the archives - Mr Sampson Ramabulana (Vho-Nzhelele) and Mr Sam Moeti (Vho-Mushasha) photographed when acting in Elelwani, an international movie.

The entertainment fraternity was shocked to the core with the news that a well-known local actor, Mr Sampson “Vho-Nenzhelele” Ramabulana of Shayandima township outside Thohoyandou, had passed away last Sunday.

He was famous for his role in the Tshivenda soapie, Muvhango.

Ramabulana (68), an educator, passed away in the Netcare Pholoso Hospital in Polokwane after a long illness. He and the late Mr Sam Moeti, better known as Vho-Mushasha, also played in Elelwani, an international movie.

Family spokesperson and son of the deceased Mr Lusani Ramabulana described his father as a go-getter, a community builder and a hard worker who did not wait for things to come to him but rather pushed until something happened. “He used to advise his learners to take education seriously and later became a motivational speaker, visiting various schools.” According to Lusani, his father was in a vehicle accident in June 2018, and was in and out of the hospital until his death.

Ramabulana joined the teaching profession in the late 70s and worked at the Tshilidzini Special School in Shayandima. Later he became the deputy principal, until he retired in 2016.

His younger brother, Mr Kingsley Ramabulana, also an actor in Muvhango, said his elder brother had been an inspiration and a leader of the community.

Mr Ramabulana leaves his wife, Ms Eunice Ramabulana, and five children, Lufuno, Lutendo, Lusani, Anza and Hulisani. He will be buried at the Shayandima Cemetery on Saturday, and the funeral proceedings will start at 06:00.