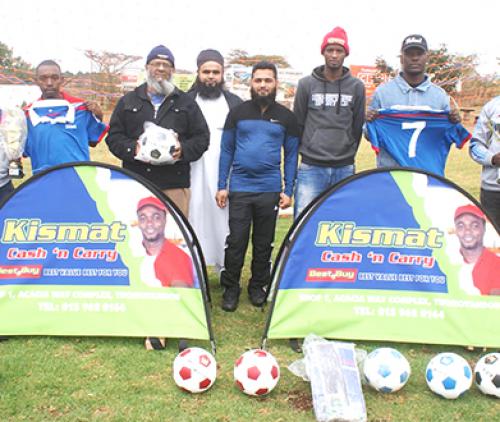 Residents of Thohoyandou Block F who have been at loggerheads with each other have finally buried the hatchet.

On Saturday, a group of Muslim businesspeople under the Venda Muslim Jamaat handed over a soccer kit, soccer balls, food to be used during a tournament and other equipment to the local youth group, Youth Evolve.

The equipment is to be used during a soccer tournament organised by the youth organisation, in partnership with the Block F community.

The handover took place at the local CTM Sports centre at Block F and was witnessed by locals and leaders of the community.

Handing over the kit and other equipment, business leader Mr Amir Patel said when approached for the donation, they did not think twice as it was for a worthy cause. “Sport does bring different people together and at our local mosque we are happy to be involved in this initiative that will bring the whole community together.”

According to him, as a united community “we have buried the past that divided us for a long time. We are also happy to be part of this, because the youth will be the main participants and they will spend the whole day here on the field of play.”

Patel further indicated that they are also part of other community initiatives and in one of their monthly projects they identify a needy community and hand over groceries to households. More than 7 000 households have already benefitted, he added.

Community leader Ronnie Mushoma thanked the businesspeople and urged them to engage the community in all they did. “We are very grateful as a community and we hope this will further strengthen relations in the community,” he said.

The CEO of Youth Evolve, Mr Fulufhelo Dzivhani, said they were involved in sports, arts and culture, but did not have the resources needed for the different sporting codes. “We are very happy, and we hope this is a good foundation for a start,” he said.