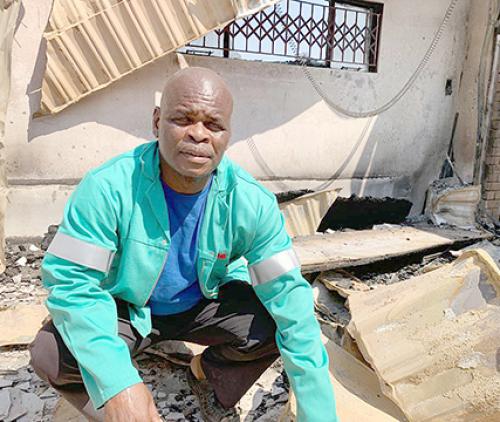 A sad Mr Edzisani Frank Muthathe, photographed among the rubble of his house.

House of well-known educator burns down

The former secretary of the Pro-Makhado task team thought he was going to live a normal life after being acquitted on two different charges relating to the burning of schools in the Vuwani area and discouraging people from voting in the past national and provincial elections.

He even had more reason to celebrate after being recalled to go back to Madobi Primary. He was chased away from the school four years ago, just after being appointed as an HOD and he was allegedly forced to report at the circuit office of Zoutpansberg North until March 4 this year.

Relating his ordeal to Limpopo Mirror on Monday afternoon at his yard, which was overcrowded by family members and colleagues from PEU, Muthathe said he was watching a soccer game at home when his wife, Tshisevhe, alerted him to a fire that was burning in their bedroom.

“When I went outside to investigate, I realized that the whole bedroom was covered with dark smoke. I then broke the window, which also cut my hand. With the help of my wife, we tried to extinguish the fire while calling for the neighbours to come and help us.” He added that although they had tried their best to extinguish the fire, they could not save anything, as the fire was moving at a very alarming pace, explained Muthathe.

After realizing that they could not stop the fire, Muthathe said he had gone to the dining room where he saved some exam papers that he was moderating. He later saved his vehicle by moving it out of the garage.

After losing everything in the house that he completed in 2009, Muthathe said he was forced to sleep in his car until Monday, when the Vhembe District Municipality’s disaster management section delivered a tent, four mattresses and blankets.

Muthathe said he regretted not insuring his property that he values at R1.9 million. His wish is that “maybe there will be a Good Samaritan who can help me to rebuild my house”.

Muthathe was first arrested on 4 May 2016 and released after spending two months behind bars. He was later acquitted by the court. He was, however, arrested again on 1 August and released on 11 August 2016 after being accused of discouraging people from participating in the local government election. He was also acquitted by the court in this case.