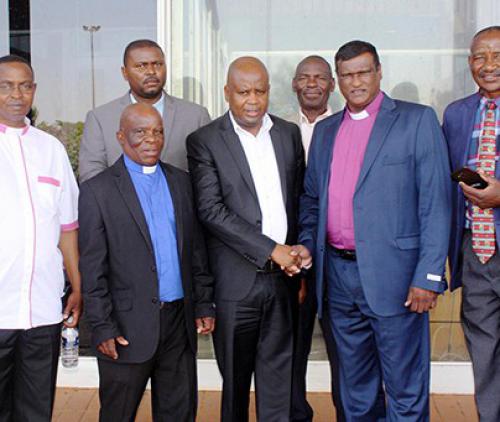 The MEC for CoGSTA, Mr Basikopo Makamu (third from right), shakes hands with the President of the SARF, Bishop Salvason Govender, while Dr Alunamutwe Rannditsheni (left) and the newly elected chaiperson of the forum's Limpopo chapter, Prophet Ntshavheni Goma (right), and some other guests who attended the ceremony, look on.

MEC Makamu was speaking at the launch of the South African Religious Forum’s Limpopo chapter last month. He was joined by some councillors from the Vhembe District Municipality, the president of the SARF, Bishop Salvason Govender, and pastors from different denominations.

The SARF is a non-profit organisation, serving as an umbrella body affiliated to COGSTA.

Bishop Govender, president of the SARF, said in his address that the members needed to unite as a religious sector and fight against problems such as gender-based violence. “We have social ills like crime, poverty and domestic violence in our communities and it needs the intervention of spiritual care. With prayer, we hope we can help to resolve some of the problems the country is encountering,” said Bishop Govender.

Govender spoke about the necessity of religious freedom and tolerance. He said his forum was the fastest growing religious, cultural, traditional and civil-society forum in South Africa. The Limpopo Chapter that was established last month means that the SARF has a presence in all the country’s provinces.

The newly elected chairperson of the SARF’s Limpopo chapter, Prophet Ntshavheni Goma, said he was ready to take the forum to new levels. He said the immediate plans were to expand the forum’s activities to the five regions in the province.