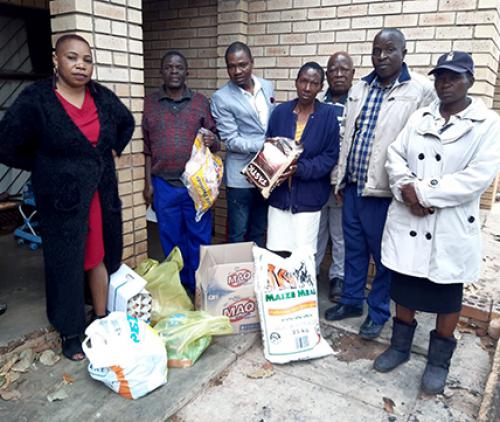 A family of seven in Tshilamba were nearly rendered homeless when their 11-room house was severely damaged by a fire last Friday.

Ms Sibongile and Mr Rendani Mushaphi were away in town when the mysterious fire broke out at their house at about 09:00. Nearby residents saw flames coming from the house and the couple were alerted. On returning to the house, they found that the fire had already spread to most rooms and was difficult to extinguish.

“We called the fire brigade, who immediately responded,” Mr Mushaphi said. “They started to extinguish the fire, but unfortunately it had already destroyed most of the rooms at that time. They were only able to save the lounge, dining room and garage.”

The fire brigade then stayed on the property from around 09:30 until 15:00 to ensure that the fire did not flare up again. “It was windy and the fire kept reappearing, but the fire brigade was there to extinguish it,” Mushaphi said. “We lost everything in the fire. It’s so sad for us.”

Mushaphi's children were away at schools in other provinces, and the nine-year-old nephew who stayed with them was off at the local school.

“There was nobody in the house at the time of the incident, and we are relieved that no person was injured,” he said. “However, the loss has put a strain on us because we have four children who are at tertiary level, which means that they are heavily relying on us. Now that we have lost our house and it needs a roof, it's going to be difficult for us all.”

Cllr Thiathu Tuwani (Ward 3 in the Thulamela Municipality), along with members of the local civic association and community members, visited the affected family and donated groceries and clothes.