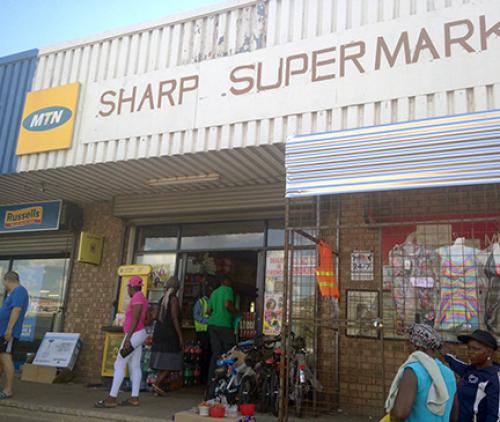 The Sharp Supermarket in Biaba where the lucky ticket was bought.

The winning ticket in last week’s Powerball Jackpot was bought from a supermarket at Biaba in Nzhelele. Some lucky guy won an amazing R114 242 816. Apparently, he only spent R15 to become an overnight multi-millionaire.

On Tuesday, I set off on a mission to try and find him.

It needs to be stated upfront that we did not want to expose him or publish his details. I merely wanted to ask him how this had changed his life. Did he dream about ever winning such an amount? Would it change him?

Seeing that Biaba is not far from where I live, I took a taxi to the Sharp Supermarket where the lucky ticket was bought. Ithuba, the lottery operator, did not provide a lot of information to help me in my search. He is an unemployed father of two who survives by doing piece jobs, Ithuba said. Understandably, Ithuba did not disclose his name or where he lives.

Taxis are wonderful sources of information. While waiting, the passengers enjoy gossiping and very little escapes the attention of the commuters. Someone will always know of someone else who may have heard a story from a friend or relative.

I started off by boarding a taxi going to the west side of Nzhelele, patiently waiting for the lotto topic to arise. A lady in the second seat behind the driver, wearing a black jacket with a red shirt, broke the ice. “Is it true that the winner of those millions is from Biaba?” she asked. The taxi had about 10 passengers, all of whom had some opinion on the matter.

“I heard no one knows where he is from. I don’t think they will find him, because people usually disappear after winning so much money,” answered a lady sitting at the back of the taxi.

By this time the driver had already lowered the music to listen to the conversation. One guy at the back, who looked like he was high on something, responded laughing. “I think the guy is already halfway overseas or hiding somewhere in Cape Town. No one can stay here with that amount of money. We have a lot of witches here in Nzhelele.”

At Ha-Rabali, a man boarded the taxi wearing shades and a Madiba-designed shirt. He quickly picked up on the conversation and added his bit of wisdom. “I heard the guy is from Ha- Mudimeli.”

The taxi was now passing the Mavhoi bus stop, where the lady who initiated the topic asked to get off. A man who looked like he was in his early 50s disagreed with the Ha-Rabali passenger. “I heard that the winner is from Tshikuwi and he is a Zimbabwean national. People who know him said he went back home.” This elicited some laughter, as most passengers seemingly did not believe this to be true.

By that time, I had reached my destination and I got off at the Sharp Supermarket where the winning ticket was bought. The shop is run by a Chinese gentleman and is located next to Biaba post office.

The shop was unusually busy for a Tuesday morning. I could not establish whether the people regularly buy their lotto tickets here, or if it was a sudden rush because they think it can lure more jackpot winners.

I waited for an opportunity to speak to the store manager, but this proved to be difficult. The Chinese man’s English was not what the Queen would consider exemplary, but I could more or less gather what he wanted to say. He didn’t know who the winner was. “A lot of people come here to bet. I don’t remember seeing him even after the results (were released). He didn’t come here to claim because our maximum claim amount is R2 100.”

Outside the store a friendly lady was selling litchis. I asked her whether she had seen or heard about the jackpot winner. “I only heard people talking about him and I have not seen him, but people are saying he is from Tshituni village,” she said.

We chatted a bit and speculated about what we could do with R114 million. I had to ask my friend Google to find out what part of the money the taxman would grab. Apparently, nothing, as it is considered to be a form of capital gains. You only have to declare it with SARS. Even on a very conservative investment you could earn over R665 000 interest per month (which would be taxable, but still).

I boarded another taxi, this time going to the eastern side of Nzhelele. About five minutes away from my destination I asked the lady next to me if she knew anything about the lucky guy. The lady, wearing a dark blue dress with her hair nicely done as if she was just returning from the salon, responded: “I only heard about him on the radio. I heard he was unemployed. God is good, shame.”