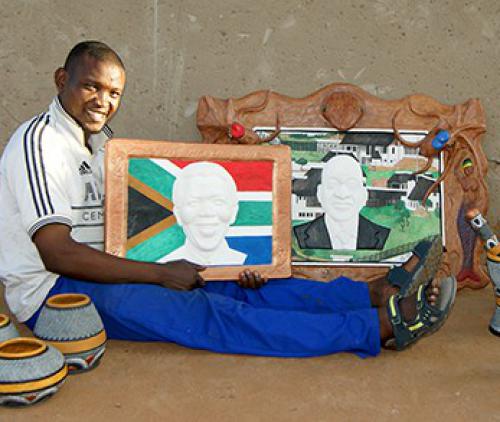 Michael Ramigo poses with some of the decorative artefacts he creates from old newspapers and bars of soap.

“I wish I could turn back the hand of time, so that I could start living from scratch and avoid the path that had led me into committing my crimes. This thought nags at my mind all the time.”

Michael Ramigo sits on a wooden stool outside his father’s house in Rabali village in the Nzhelele area. He stands up and slips into the house and reappears again, carrying a poster-face-statue of South Africa's former state president, Mr Nelson Mandela, which he had made.

He squints his eyes as the glare of the sunshine assails his face. Maybe his eyes are not yet used to the sun. He has just been released on parole after spending 17 years in prison.

He was sentenced to 45 years’ imprisonment for armed robbery (vehicle), kidnapping and attempted rape. Some of his sentences were running concurrently, which had brought his actual sentence to 35 years.

“After committing all those crimes and staying in prison for most of my life, it’s not easy to tell people that one has changed and then they believe you for your words,” he said softly. “I had had enough time in jail to reflect on my crimes. Sometimes I would spend sleepless nights feeling ragged and hating myself – that was when I thought that I had wronged other people, and people who were innocent, for that matter.”

Ramigo finds it hard to comprehend the impetus that had driven him into committing the crimes. “While I had done all those crimes with my five co-accused, I cannot today shift blame on them by saying that they had led me along,” he says. “Peer pressure is a complex element – the need to please friends, to fit in and to appear 'good' in the eyes of other people who do not even care how you look or how you are dressed.”

He was arrested in 2002 and the case had dragged on until they were sentenced in 2005.

“Just after sentencing, we were all put in shackles and handcuffs,” he said. “So, hobbling out of the courtroom and getting shoved into the back of the van, it felt like my world had come to an end. It had given me a terrible feeling. The saying that crime doesn’t pay rang louder in my brain.”

Through the years, Ramigo had to undergo rehabilitation programmes, ranging from anger management to overcoming substance abuse. He had to learn new life skills to help prevent relapses.

“I was released on 30 October and my family had welcomed me with open, warm arms,” he said. “At the time of my arrest, my sons were still young, a two-year-old, and the other was a few months old. Now they are 19 and 17. I am with their mother. We are bonding, it’s a journey of reintegration.”

Ramigo is facing about 17 years’ time as a parolee, where he will have to spend all those years complying with the rules that govern him as a parolee.

“I spend my time fashioning soaked newspapers into decorative drums, bowls, statues, tangos, flowerpots and portraits,” he said. “I learned the skill of pottery making in prison. I aim to utilise these skills to earn a living, so that I get to fully support my wife and children. My artefacts sell from R500 each. I am still creating my market. If I can get more old newspapers, some green bar soaps and paints, I can create more of these decorative artefacts.”

He has some words of advice to the youth: “Stay away from crime. Focus on your studies and make good friends who always encourage you to do good things and not bad things.”